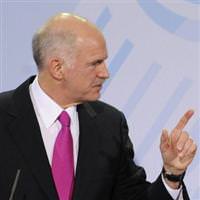 Greece is under pressure to reform so it can receive further aid and Papandreou will hold talks with German Chancellor Angela Merkel on the euro zone debt crisis later in the day.

"Along with much tighter fiscal oversight, we must expand the EFSF (European Financial Stability Facility) and formulate permanent mechanisms for economic stability and solidarity," Papandreou said in a speech to industry leaders in Berlin.

Merkel is struggling to convince rebels from within her own party to vote for the enhanced EFSF, as agreed by European leaders in July, in parliament on Thursday.

Although the bill will be passed as opposition parties support it, she faces a major blow to her authority if she has to rely on opposition support. Opposition parties have said Merkel would have to call for early elections if she fails to secure a majority from her own ranks.

Panadreou said Greece would meet all its commitments to win the next round of aid.

"I promise you we Greeks will soon fight our way back to growth and prosperity after this period of pain," he said.

He said he understood the reluctance of taxpayers in other EU countries to help Greece out of its crisis but told them it was not an investment in the mistakes of the past, rather in the success of the future.

"The euro zone must now take bold steps toward fiscal integration to stabilize the monetary union. Let's not let allow those who are betting against the euro to succeed," Papandreou said.

A mission of inspectors from Greece's international lenders, called the troika, suspended a visit to Athens earlier this month after the country failed to meet its fiscal pledges under its EU and International Monetary Fund bailout plan.

However, the mission will probably return to Athens on Wednesday, a source close to the inspection team has told Reuters.