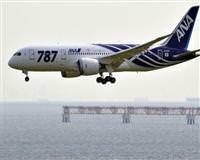 All Nippon Airways' first Boeing 787 Dreamliner touched down in Tokyo early on Wednesday with hundreds of aviation fans welcoming the carbon-composite plane that its American maker is fielding, albeit three years late, to keep rival Airbus out of its best market.

The U.S. aircraft giant has had to cede ground to its European foe nearly everywhere else, including at home. Airbus has outpaced it globally in deliveries for the past nine years and in orders since 2008. Airbus has even had some success selling its A380 super jumbo to new carriers in Japan.

Japan remains, however, a fortress for Boeing, which dominates with a 90 percent market share. Flag-carrier Japan Airlines has never bought a European jet, while the Dreamliner's new owner, ANA, has already phased out some of its ageing single aisle Airbus A320s.

Spectators flocked to Tokyo's Haneda Airport to catch a glimpse of the first twin-engine, lightweight jetliner, which cruised in under a clear autumn sky before smoothly landing at around 9:04 a.m.

Onlookers, many having arrived hours earlier to secure a good view, applauded and thronged to photograph the aircraft, whose blue and white fuselage had a big 787 emblazoned across its 58-metre (190 ft) body.

The jetliner has a backlog of 821 orders -- nearly a 10th of those from Japan -- built up over three years of setbacks as Boeing engineers dealt with glitches and parts hold-ups to build the aircraft, which Boeing says will deliver a 20 percent improvement in fuel efficiency.

The twin-engine aircraft boasts the latest features aimed at giving passengers a more comfortable flight and winning over airlines trying to garner business in a fiercely competitive air travel market.

They include improved cabin air, larger windows that can be electronically dimmed and, in a nod to Japanese sensibilities, hands-free toilets with bidets.

Boeing needs to follow Wednesday's arrival with a steady stream of other flights from assembly plants in Seattle, however, to guarantee the loyalty it counts on to keep Japan a satisfied customer, one of the few places it has fended off Airbus.

ANA, Japan's biggest airline by passenger traffic, inked the first order in 2004 and now expects to have 20 Dreamliners by March 2013 and receive all 55 jets it has ordered by March 2018 as it looks to lower fuel and other costs to better compete.

ANA's president, Shinichiro Ito, told Reuters this month that the company was in big trouble as it had to push back its business plans because of a repeated delay in 787 deliveries.

Firmly planted in the American sphere after its defeat in World War Two, Japan could always be relied on by U.S. aircraft makers to buy American, particularly during trade friction in the 1980s and 1990s as Japan sought to calm American emotions by buying billions of dollars worth of made-in-America jets.

That incentive has waned as China became the target of American protectionism. Boeing, whose corporate headquarters are in Chicago, has industrial ties in Japan dating back almost six decades that now equate buying Boeing with buying Japanese.

The wings on the 787 parked on the tarmac at Haneda were made in Japan by Mitsubishi Heavy, the first time that a foreign contractor has built the most complex mechanical component of an aircraft for Boeing.

Pride in Japanese aviation technology is helping fuel enthusiasm for the American aircraft. Tickets for the 787's first scheduled commercial flights to Hiroshima and Okayama in western Japan on Nov. 1 sold out minutes after going on sale, an ANA spokesman said.