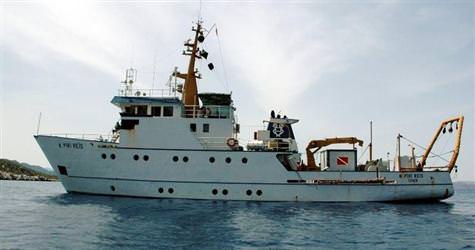 Turkey said on Tuesday it was exploring for gas in an offshore zone where Cyprus started drilling last week, a step that could escalate a dispute over Mediterranean resources.

The question of who has the right to tap deposits in a region holding the world's biggest natural gas find of the past decade has added urgency to efforts to settle the conflict over Cyprus, divided since 1974 into Greek and Turkish enclaves.

The internationally-recognised Greek Cypriot government says it has a sovereign right to drill. Turkey, the only country to recognise a separate Turkish Cypriot state in the north of the island, says the island's status must be resolved first.

The two sides are racing to make progress on complex reunification negotiations before a scheduled meeting with U.N. Secretary-General Ban Ki-moon at the end of October.

Last week, U.S.-based Noble Energy started drilling offshore on behalf of Cyprus in an area termed Block 12, south of the island. Turkey has pledged to drill for gas on behalf of Turkish Cypriots unless the Greek Cypriots stop.

"If the Greek Cypriots agree to stop, we'll stop too. But if they insist on proceeding, they know very well Turkey's attitude," Turkey's minister for European Affairs, Egemen Bagis, said on Tuesday during a visit to the island's north.

"We have to warn against Greek Cypriot provocation. The resources are not going anywhere, so why are they being used to block [Cyprus reunification] negotiations?"

Israel is also drilling nearby, and the issue has emerged as a further bone of contention between Turkey and the Jewish state. Long Israel's rare Middle East ally, Ankara has downgraded ties in recent weeks over Israel's refusal to apologise for a deadly raid last year on a Turkish aid flotilla.

The United Nations on Tuesday urged restraint and envoy Alexander Downer said the U.N. could consider a mediating role provided the sides asked for its involvement.

"We really want these (peace) talks to succeed, we are putting our main effort into making sure these talks do succeed, and in the meantime we hope the two sides, or the various sides, will act with due restraint..to ensure that in no way this issue derails these talks."

Last week, Turkey and Turkish Cypriots signed a pact outlining maritime boundaries in the eastern Mediterranean, paving the way for gas exploration. Turkey said it would protect any research vessel with warships, raising the prospect of an armed stand-off.

On Sept. 23, Turkey dispatched its only research vessel, the Piri Reis, to the eastern Mediterranean.

"Piri Reis, escorted by warships, has started research in the same area where Greek Cypriots are exploring," Omer Celik, Vice Chairman of the ruling AK Party who oversees foreign affairs, said on Twitter.

"We have shown clearly to everyone that we will not allow the eastern Mediterranean to become a Greek Cyprus-Israel goal," he said in another message.

The Turkish Cypriot prime minister had said overnight the vessel had begun exploring, but did not say precisely where. Greek Cypriot sources have said the Turkish vessel was about 80 km (50 miles) from the plot Greek Cypriots are drilling, but there was no sign that it was carrying out research work.

Turkey's Navy has made no announcement regarding the deployment of warships in the area. It was not possible to independently verify the presence of warships. A diplomatic source said it was "my understanding that the survey boat is unaccompanied".