Syria will bear the burden 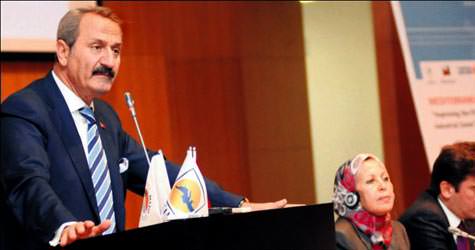 Turkey threatened on Friday to retaliate against Syria for its decision to impose a sweeping import ban, in a further sign of fraying ties between the two neighbours over Syrian President Bashar al-Assad's bloody crackdown on protesters.

As Western nations broaden sanctions against Syria's ruling elite and protests disrupt the economy, Damascus last week slapped a ban on all imports except grain, raw materials and 51 essential items, to preserve its dwindling foreign reserves.
Turkish Economy Minister Zafer Çağlayan said he hoped Syria changed its practice as soon as possible and warned that Turkey, Syria's largest trading partner, might decide to target Syria's exports.
"Syria is exporting a significant amount to Turkey. We are not creating obstacles to Syria's exports to Turkey, which amount to $700-800 million annually. But I want to reiterate that if they impose an obstacle to Turkish goods, Turkey will do the same," Çağlayan told reporters in the city of Mersin.
"Turkey, a country with $300 billion trade volume, will be largely unaffected by this. But the possible burden Syria will have to bear will turn the Syrian economy upside down."
Once warm ties between Turkey and Syria are near breaking point over Assad's repression of anti-government protests.
Turkey is preparing a list of sanctions against Damascus after failing to persuade Assad to end violence and implement democratic reforms.
Food and consumer goods prices are rising sharply in Syria, adding to the woes of Syrians who have seen hundreds of their countrymen killed in a crackdown the United Nations says has killed about 2,700 people.
The head of the Turkish Exporters Association, Mehmet Büyükekşi, said the situation in Syria was critical and that violence was "significantly" damaging the Syrian economy.
"Their tourism revenues are next to zero, export revenues are on a freefall, and the forex reserves of the government are running out," Büyükekşi said in a statement.
"Media reports cause a misperception of the issue. This decision impacts imports from not only Turkey but all countries, including Arab states," he said, referring to reports Syria was singling out Turkish goods.
Bilateral trade between Turkey and Syria was worth $2.5 billion in 2010, and investments by Turkish firms in Syria reached $260 million.