Turks to compete for the ‘Oscar’ of automobiles 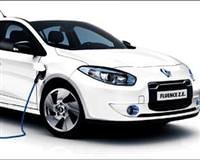 The new Ford Focus, designed by Murat Güler and the electric Fluence Z.E., produced at the Bursa Oyak Renault facility, will be competing to be selected as car of the year.

The vehicles that will be competing for Europe's automobile of the year have been determined. The Car of The Year (COTY) Organization has selected a total of 38 models from 23 brands to compete this year. Amongst the list of candidates is a vehicle designed by a Turk and another vehicle that was manufactured in Turkey. The Ford Focus, which was designed by Murat Güler and Renault's first electric car Fluence, will be competing to be selected as car of the year.

FOCUS GETS A TURKISH SIGNATURE
Having played an important role in Ford's 'One Ford' strategy to surpass the crisis, Güler was the designer for the new Focus, which will be released by the American giants all over the globe. Güler, who began working with Ford in 1999 on the Focus and C-MAX design teams, broke out with his success in designing the Iosis X concept. The Iosis X, which was designed entirely by Güler, established the groundwork for Ford's first-ever European SUV model. A year later the Iosis X went into mass production under the name Kuga. Also signing on to the Kuga design, Güler went on to design the Focus family of vehicles, Ford's first global model. Güler also designed the new Mondeo and is now working for Ford's most luxurious brand Lincoln. The Renault Fluence Z.E., which has begun to be produced at Turkey's Oyak Renault Factory, is the first sedan in the electric vehicle series. The Fluence Z.E. will first be exported to Israel and will be sold in Turkey in December. The electric Fluence has a 185-kilometer battery that charges for 4.5 liras. If the vehicle's battery is recharged during the evening hours, when electricity rates are lower, the price for driving 100 kilometers will drop to just 1.5 liras..

Fifty-nine jury members from 22 countries…
The COTY jury will consist of 59 members from 22 different countries. SABAH journalist Ufuk Sandık will be representing Turkey. Our writer is the first and sole Turkish jury member of the organization which was established in 1964.