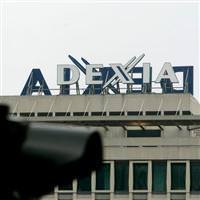 France and Belgium will guarantee the financing of stricken bank Dexia, finance ministers pledged on Tuesday as officials prepared a rescue designed to stop its troubles from worsening the euro zone crisis.

"We are going to take action concerning our banks, and the decision taken so far is to act with a guarantee," Belgian Finance Minister Didier Reynders said after a joint government statement that followed a 38 percent drop in the bank's share price in early trading.

Brought low in recent weeks by the bank's exposure to the euro zone's weakest country, Greece, shares in Dexia recovered some ground after the pledge, but still stood 17 percent lower at 11:50 a.m. British time.

That valued its equity at around 2.5 billion euros (2.1 billion pounds) according to Reuters data -- in contrast with a holding of 3.8 billion euros of Greek sovereign bonds and the bank's total credit risk exposure to the country of 4.8 billion euros, one of the largest among non-Greek lenders.

Dexia stands to lose more still if European finance ministers decide to make banks take bigger losses on Greek debt than they have already agreed to accept. Ministers were discussing exactly that on Tuesday.

Its troubles also date back to 2008, when short-term credit dried up because a large proportion of its long-term lending to public authorities was financed by short-term borrowing. Bank-to-bank lending was once again under pressure on Tuesday with rates at their highest in over a month.

Dexia's overall credit risk exposure is 511 billion euros, of which 59 billion is in the United States. So its exposure to the multi-trillion dollar U.S. municipal debt market has the potential to reverberate across the Atlantic too.

The rescue plan looks likely to involve a break-up of the bank's assets and the creation of a state-supported 'bad bank'.

A source familiar with the situation said that the most likely option was the pooling of weak assets in that 'bad bank', and the sale of healthier operations, such as its Belgian and Turkish banking businesses.

A French government source confirmed that asset sales were at the centre of the rescue proposal but said a capital injection was not currently under consideration.

Dexia, which is still struggling to resolve funding issues that prompted a bailout in 2008, vowed on Tuesday to clean up its balance sheet after an emergency board meeting.

Dexia added that Chief Executive Pierre Mariani had been charged with preparing measures to resolve such structural problems that were harming its operations.

Healthy operations, such as Dexia's Turkish unit Denizbank, Dexia Asset management and its Canadian joint venture will be sold separately, the report said.

Assets from its public financing businesses in France, Italy and Spain would be put into a "bad bank," with state guarantees.

Dexia is not the only European bank facing a need for capital as regulations become tougher, profits sag and lenders face losses on sovereign bonds if the euro zone crisis is not resolved.

If banks are unable to raise the capital privately, government ownership of the sector could jump to 22 percent from 7 percent now, JPMorgan analyst Kian Abouhossein said in a note.

Dexia already took a 338 million-euro hit to cover a 21 percent loss on its Greek exposure in July, but with market prices indicating that investors could suffer a loss of 50 percent or more on Greek debt the group's final bill could be considerably higher.