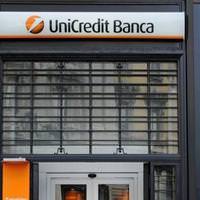 On Tuesday, Moody's lowered its rating on Italy's bonds by three notches to A2, saying it saw a "material increase" in funding risks for euro zone countries with high levels of debt and warning that further downgrades were possible.

Italian banks have come under pressure in recent weeks because of the spreading debt crisis and are seen as vulnerable because of their vast holdings in Italian government bonds.

Moody's said in a note it had cut UniCredit's long-term debt and deposit ratings to A2 from Aa3, concluding the review for possible downgrade initiated in May this year.

"Growth prospects for many of the group's key markets, and in particular Italy, have been cut in recent months, which is likely to make significant further improvement in profitability and asset quality more uncertain and difficult to achieve," Moody's said.

But the rating agency also pointed up the bank's improved capital adequacy and its robust liquidity, which has allowed it to cope with difficult market funding conditions.

The long-term debt of Intesa, Italy's biggest retail bank, was cut to A2 from Aa3. In a note Moody's noted Intesa's direct exposure to the Italian sovereign and its pronounced focus on domestic business.

The management of both UniCredit and Intesa Sanpaolo have said they currently have no funding problems.

Besides its downgrade of Italian banks, Moody's also cut its ratings on the debt of a series of state-controlled Italian companies including oil and gas group Eni, utility Enel, defense company Finmeccanica and power grid operator Terna.