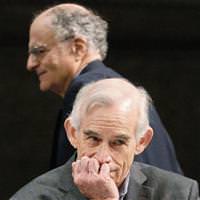 U.S. economists Thomas Sargent and Christopher Sims won the 2011 economics Nobel prize on Monday for work on the relationship between policy measures and how they can affect the economy.

The Royal Swedish Academy of Sciences, which made the award, said the 10 million Swedish crown ($1.5 million) prize recognised their "empirical research on cause and effect in the macroeconomy".

The economics prize, officially called the Sveriges Riksbank Prize in Economic Sciences in Memory of Alfred Nobel, was established in 1968. It was not part of the original group of awards set out in dynamite tycoon Nobel's 1895 will.