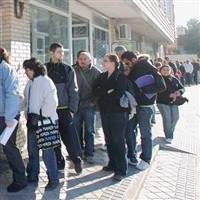 Philips Electronics said it was considering its options should the sale of its TV business collapse as it reported plummeting third-quarter profits and little hope of a material improvement in the near term.

Philips -- the world's biggest lighting maker, a top three hospital equipment maker, and Europe's biggest consumer electronics producer -- said negotiations to sell off most of its TV business to Hong-Kong based TPV were intense and constructive and taking longer than expected.

The deal was due to close before the end of this year.

"For the eventuality that a final agreement cannot be reached, Philips will consider its alternative options," said Frans van Houten, chief executive in a statement on Monday.

Philips said it would aim to cut 4,500 jobs as part of an 800 million euros cost-cutting scheme to boost profits and meet its financial targets.

Despite reiterating the firm's 2013 financial targets of 4-6 percent sales growth, and a margin on earnings before interest, tax, and amortization (EBITA) of 10-12 percent, Van Houten said Philips had a long way to go.

"We are not yet satisfied with our current financial performance, given the ongoing economic challenges, especially in Europe, and operational issues and risks. We do not expect to realize a material performance improvement in the near term," he said in a statement.

Analysts in a Reuters-commissioned poll had expected third-quarter net profit of 53.8 million euros on sales of 5.341 billion euros.

In the past seven months, Philips has issued two profit warnings, slashed its long-term growth targets, and been hit by the combination of rising raw material costs, sagging consumer confidence, sluggish construction markets and government budget cuts in the healthcare sector.

The Dutch firm halved its third-quarter earnings before interest, tax and amortization to 368 million euros, from 648 million euros a year ago, due in part to higher restructuring and acquisition-related charges and lower earnings at the firm's entertainment and consumer lighting units.

Philips's share price has plunged almost 40 percent over the past year as it struggles to compete with lower-cost Asian makers of consumer electronics. Tepid consumer confidence and weak economic growth in Europe and the United States have also hit demand for products ranging from televisions and audiovisual equipment to electric toothbrushes, as well as its street and home lighting systems.

Philips competes with Samsung and LG Electronics, among others, in consumer electronics, and with General Electric and Siemens in the hospital and lighting markets.