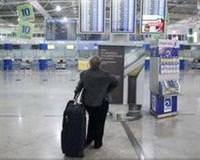 Demonstrators clashed with police in front of the Greek parliament on Wednesday as tens of thousands rallied at the start of a general strike timed to coincide with a vote on a bitterly resented new round of austerity measures.

Protesters showered police with stones and fire bombs on the steps of the parliament building, forcing them to retreat. The boom of tear gas canisters fired by police rang out over Syntagma Square while black smoke curled into the air.

For the first time since the crisis broke out two years ago, demonstrators reached the steps of the neo-classical building and there was a bitter tang of tear gas inside, a Reuters reporter said.

With memories still fresh of the running battles that marked anti-austerity protests in June, more than 5,000 police had deployed on the streets and the mood among the demonstrators was angry.

"We have no future here. All young people want to go abroad and they are right to do so," said Anastasia Kolokotsa, 17, protesting outside parliament.

"There are no jobs, there is nothing here."

Many young protesters were carrying helmets and by early afternoon there were other reports of clashes away from the main rally involving masked, black-clad youths hurling Molotov cocktails at police who responded with teargas.

The 48-hour strike shut down government departments, businesses and public services, as well as shops and bakeries. Some 150 domestic and international flights were canceled.

Prime Minister George Papandreou, trailing badly in opinion polls, has appealed for support from Greeks before parliament votes on the latest measures which include tax hikes, wage cuts and public sector layoffs.

But after repeated rounds of austerity measures, hostility to the government and the international lenders demanding ever tougher action has risen to new levels. Unions urged deputies not to pass the law.

"If they have any humanity, decency, sense of pride and Greek soul left, they must reject the bill," Nikos Kioutsoukis, a top official in private sector union GSEE which is leading the strike with its public sector counterpart ADEDY.

With Greece's economy already on its knees, protesters said more austerity measures would only drive the country deeper into the ground.

"The dangerous slide in the economy and the society must stop," small business association GSEVEE said. "It only leads to further shutdowns, unemployment, pauperization, wider deficits and even bigger debt."

Unions said before the strike they expected one of the biggest demonstrations since the start of the crisis two years ago. By early afternoon, Syntagma Square outside parliament was packed with protesters.

Apart from the rally, the streets of central Athens were eerily quiet with posters reading "We are shutting down for the day so that we don't shut down forever," plastered over shuttered storefronts.

Wednesday's action comes as European Union leaders scramble to outline a new rescue package in time for a summit on Sunday that hopes to agree measures to protect the region's financial system from a potential Greek debt default.

"We are in an agonizing but necessary struggle to avoid the final and harshest point of the crisis," Finance Minister Evangelos Venizelos told parliament. "From now and until Sunday were are fighting the battle of all battles."

Trapped in the third year of deep recession and strangled by a public debt amounting to 162 percent of gross domestic product which few now believe can be paid back, Greece has sunk ever deeper into crisis.

Papandreou's narrow four-seat majority is expected to be enough to ensure the austerity bill goes through, especially given possible support from a smaller opposition group.

But party discipline is increasingly strained with one PASOK deputy resigning his seat in protest and at least two others threatening to vote against part of the package dealing with collective wage bargaining agreements.

Speaking in parliament on Wednesday, Dimitris Reppas, minister for Administrative Reform, reflected the increasing sense of isolation among many in the ruling party, complaining he felt as though he had been thrown to the lions.

"In government, we often feel like ... we are in the Colosseum, fighting the debt monster while everybody else is just sitting in the stands, watching and commenting," he said.

A first vote takes place late on Wednesday on the overall bill, which mixes deep cuts to public sector pay and pensions, tax hikes, a suspension of sectoral pay accords and an end to the constitutional taboo against laying off civil servants.

A second vote on specific articles is expected sometime on Thursday and only after that the bill becomes law.

International lenders, who are providing the funds Athens needs to stay afloat after it was shut out of bond markets last year, have expressed impatience at the slow pace of reform as Greece has slipped behind on its budget targets.

There has been growing talk that Athens should be placed under tighter supervision by EU authorities to ensure it meets its reform obligations.

Squeezed between escalating popular protests against the cuts already imposed and demands from the EU and International Monetary Fund for even tougher action, Papandreou's support has appeared increasingly uncertain.

Although the government has repeatedly ruled out early elections, many political analysts now believe that a snap ballot will probably be held sometime in the coming months.