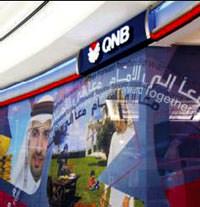 Qatar National Bank, the Gulf state's largest lender, is eyeing Denizbank, the fast-growing Turkish arm of euro zone debt casualty Dexia, in a deal potentially worth up to $6 billion.

"QNB Group announced that it has entered into negotiation with DenizBank in Turkey toward the aim of acquiring a controlling stake," it said in an emailed statement, confirming a Reuters report earlier on Tuesday.

It said talks were still at an early stage.

The lender said a potential deal would depend on how well Denizbank fitted with QNB's expansion strategy and on a price that "fairly reflects" the Turkish bank's financial position.

Denizbank shares rose 12.7 percent on the Istanbul stock exchange at 1333 GMT. They have risen more than 55 percent in the last month in anticipation of a potential deal, Reuters data shows.

Qatar's al-Thani royal family also runs investment groups including QIA, which has invested in European banks including Barclays in the past.

QNB, which has been talking to investments banks about a possible bid, could also use its own in-house investment banking team for an offer, people familiar with the matter told Reuters.

Bankers said Denizbank was one of Dexia's best assets and a cheap way into the Turkish market, where banking licenses are hard to obtain. Sources said the deal could be worth up to $6 billion.

Middle East unrest and debt crises in Europe and North America have made Turkish firms a natural target for Gulf investors, lured by the region's growth prospects.

A strong recovery from the global financial crisis of 2008-2009 has persuaded many long-term investors to look at Turkey.

Its economy grew 10.2 percent in the first half of this year while the International Monetary Fund's forecast of 2.5 percent growth in 2012 is well above the 1.1 percent which it predicts for the euro zone.

The bankers said an acquisition would be a stretch for expansion-minded QNB, even though it was the largest lender in the Gulf Arab state.

"A purchase would give them scale and the Gulf Arab region is in love with Turkey. Still, Denizbank would be a large trade for them," one banker said.

QNB has been expanding abroad, with operations in Jordan, Switzerland, Syria and the United Arab Emirates. Its third-quarter net profit rose 27 percent as it increased lending in Qatar's booming economy.

Sources said the sale of Denizbank could attract multiple offers and Dexia would be able to offload the business easily.

Last week, Sberbank, Russia's No.1 lender, said it was looking at the bank as a potential acquisition target but had yet to begin talks.

Bankers said Intesa Sanpaolo, Italy's largest retail lender, was another potential bidder. Chief executive Corrade Passera has said there was "nothing on the table" on the subject.

They also said Turkish group Akbank could be a candidate but were skeptical about interest from other domestic banks. International interest was expected to include HSBC.

Dexia was rescued by Belgium and France because of its heavy exposure to Greece and after it could no longer secure short-term credit to finance long-term lending activities.

Dexia bought into Denizbank in 2006 when it took a 75 percent stake for $2.4 billion, later lifting its ownership above 99 percent.

In August, QNB set up a $7.5 billion euro medium-term note program to fund its banking operations. The lender picked Barclays, HSBC and QNB Capital as arrangers.