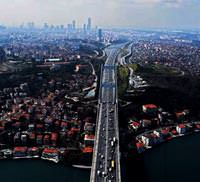 With Prime Minister Erdoğan’s announcement “We will demolish all illegal buildings and will rebuild them” begins the largest construction move in the history of the Republic. Out of the 19 million buildings presently in Turkey, 8.5 million buildings will be rebuilt. The market derived from this equates to 450 billion liras.

The project which will transform Turkey into a series of modern and earthquake resistant cities will cost approximately 450 billion. The project will also work to reinvigorate the nation's economy. Despite the lack of a precise inventory, it appears half of Turkey's 19 million buildings are illegal, unlicensed, unhealthy and potentially unsound in the case of an earthquake. In essence this means that eight million, 550 thousand buildings, which house millions of people, will need to be demolished and rebuilt.
641 MILLION SQUARE METERS
When taking into consideration that the average size of the residences in question are 75 square meters each, the total area needed to be rebuilt rounds up to 641 million 250 thousand square meters. According to the Ministry's building construction cost index, to build one meter square costs 700 TL. According to calculations, in order to transform these buildings into sound structures the cost of resources needed is 448 billion, 875 million liras.

KONUTDER: THIS WILL BE THE BEGINNING OF MOBILIZATION FOR URBAN TRANSFORMATION
Residential Developers and Investors Association or, KONUTDER Chairman Ömer Faruk Çelik noted that the Prime Minister's announcement could be assessed as being the start of mobilization for the country's urban transformation. Çelik also emphasized the need for local municipalities and the Ministry of Environment and Urban planning to coordinate efforts to establish an inventory.
Also mentioning that tenants will need sufficient time granted in the case of unstable buildings being rebuilt, Çelik stated that if buildings are not able to be rebuilt in the time allotted, then it will be required for the public to empty out the buildings themselves. Çelik went on to state, "The Building Code and the Property Ownership Law will need to be reorganized accordingly."
GYODER: RENEWAL IS UNAVOIDABLE
The Association of Real Estate Investment Companies (GYODER) Chair Işık Gökkaya also expressed that rough calculations point to the cost of rebuilding half of the buildings in Turkey as reaching 450 billion liras. Gökkaya states, "An earthquake in Istanbul alone could cause Turkey's economy to collapse, in addition thousands of lives would be lost. Therefore, with the ministry's coordination, urban renewal is unavoidable."
TOKİ SAVES 43,000 FAMILIES FROM UNSTABLE STRUCTURES
Prime Minister Recep Tayyip Erdoğan's announcements drew attention to Turkey's Housing Development Administration, or TOKİ. The administration's urban renewal project alone, applied to illegal buildings and shanty towns situated in areas heavily damaged in the Marmara earthquake, has saved 43,725 families from unstable structures in a potential earthquake. The area which has already undergone urban renewal is five thousand hectares, which equates to the size of eight thousand football stadiums.
WHAT DID THE PRIME MINISTER SAY?
Reminding once again of the illegal, unlicensed and unsound structures which account for nearly half of all of Turkey's buildings, and following the 7.2 earthquake in Van, Prime Minister Erdoğan stated that by conducting all of the necessary measures, they will expropriate all illegal buildings and reconstruct them.