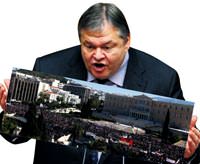 Greece's new government took a first step on Friday towards meeting terms of an international bailout needed to avoid bankruptcy, submitting a budget bill that foresees no new austerity measures next year as long as reforms are enacted.

The draft predicted the Mediterranean state would face a fifth year of recession but said a plan to convince private creditors to take a 50 percent loss on bond holdings could cut the fiscal deficit by more than a third.

Economists said years of swingeing tax hikes, public salary and pension cuts and other belt-tightening measures could send the economy deeper into contraction and the draft spending plan's forecasts are probably too optimistic.

The budget draft forecasts the 220-billion-euro economy to shrink 2.8 percent in 2012, versus 5.5 percent this year.

"The feasibility of next year's fiscal deficit depends highly on the depth and severity of the recession," said Diego Iscaro, an economist at IHS Global Insight.

"Under current circumstances, we expect the economy to contract at a sharper rate in 2012 and therefore we believe that the target will be difficult to achieve."

But still more important, analysts said, was a rift between parties in technocrat Prime Minister Lucas Papademos's unity coalition caused by jockeying for position by the conservative New Democracy party ahead of an election slated for Feb. 19.

Papademos must win pledges from the rival parties that they will do what it takes to meet bailout terms or Greece's lenders will withhold an 8-billion-euro aid tranche Athens needs to dodge default next month, plus longer-term financing later.

As part of that process, representatives from the "troika" of the International Monetary Fund, the European Union and European Central Bank met Greek Finance Minister Evangelos Venizelos and Papademos on Friday.

The officials, who made no statement after the talks, will also meet the heads of the three coalition parties on Saturday.

Tensions have risen between coalition partners, the Socialists of fallen prime minister George Papandreou and New Democracy, as the latter's leader, Antonis Samaras, has refused to sign the commitment sought by EU and IMF authorities.

Underscoring the pressure on Athens, the Dutch finance minister said the Greek parties had "to make a clear and unequivocal choice in writing" by signing a pledge.

"Are they with us or not? We don't have the luxury of patience any longer," Jan Kees de Jager said.

Samaras said on Thursday he wanted to win an outright majority in the snap election to reverse the austerity measures he disagrees with. Although publicly committed to coalition, he has distanced himself while still being seen to be taking part for the sake of keeping Greece's creditors on side.

On Friday, his party repeated an oft-made call to scrap the austerity measures prescribed under the bailout - known as the "Memorandum" in Greece - in favour of pro-growth policies.

"The Memorandum needs to be renegotiated. A recipe that doesn't work needs to be changed," it said in a statement.

It is not clear whether the EU and IMF will demand more financial pain from Greeks. But Venizelos said no new tax hikes, public wage and pension cuts or other belt-tightening steps were necessary if measures passed by the previous government were carried out.

"We won't need to take any more measures that reduce citizens' incomes as long as we implement what we have already approved and which is already difficult," he told reporters.

The Socialist-New Democracy dispute has eroded support for the two main groupings, which are also joined in the new government by the far-right LAOS party.

A poll showed 68 percent of voters like Papademos but support for New Democracy had slipped to 21.2 percent, from 22.5 percent before the creation of the unity government.

The Socialists fell to 11.8 percent, from 15, according to the survey from pollster ALCO. Voters who were undecided, would abstain or cast blank ballots together totalled 28.9 percent.

The reforms have angered many Greeks. On Thursday at least 50,000 took to Athens' streets on the anniversary of a 1973 student uprising against the then-ruling military junta.

Chanting "EU, IMF out!", they protested against belt-tightening steps that have hit incomes and caused job losses, driving unemployment to a record 18 percent.

Although economists said the budget projections would remain benchmarks for Greece's aid deal, its long history of missing targets and revising figures meant the numbers were largely only for reference and were bound to change later.

And with investors shifting focus to struggling countries such as Italy, and the ultimate fate of the euro zone itself, the data would have less effect on markets than the political will of the government to pursue reforms.

"Much more important than individual numbers will be that the new government, in all its constituent parts, subscribe to the troika programme," said Holger Schmieding, an analyst at Berenberg Bank.

The cabinet submitted the budget to parliament, where it will proceed through committees for a vote by the whole chamber, which Venizelos said would come on Dec. 7.

The budget's main aim is a primary budget surplus, with revenues exceeding spending minus debt maintenance costs, so Greece can start digging itself out from under a debt load that exceeds 30,000 euros for every Greek.

To do that, Papademos's government must tackle rampant tax evasion, start selling off billions of euros worth of inefficient public companies and lay off public workers - all reforms approved but never executed by Papandreou.

Another main component is a plan in which Greece hopes to halve the debt held by private creditors by negotiating a 50 percent loss on the Greek bonds they hold in exchange for longer term paper. According to the budget draft, the plan can reduce Greece's 2012 budget deficit by more than a third from this year's level to 5.4 percent of GDP.

Without the swap, over which Greece began talks with its creditors on Friday, the deficit would be 6.7 percent, the draft forecast. Either deficit figure would be smaller than the 9 percent the government expects this year.

"After a historical course of steady increases in public debt, now this will be reversed," Venizelos said. "Now the course is that of reducing public debt and removing the burden from Greeks' backs."