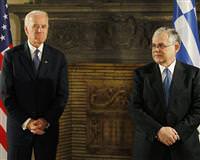 The United States will support Greece during these difficult times, U.S. Vice President Joe Biden said during a visit to Athens on Monday, in remarks that offered reassurance rather than concrete aid.

"I am here to tell you that we stand with you in solidarity as you meet some difficult requirements of the IMF and European Union," Biden told reporters before a meeting with Greek Prime Minister Lucas Papademos. "It is a difficult time for Greece and we stand ready to help in every way we can."

Biden travelled to Greece before a key EU summit on the debt crisis in Brussels on Friday, in what has been called a crucial week for the common currency.

Illustrating Washington's concern that the euro zone's troubles could sap the fragile U.S. recovery, U.S. Treasury Secretary Timothy Geithner will separately visit the euro zone this week to urge its leaders to act decisively to control the crisis.

U.S. officials speaking in Washington on Geithner's mission stressed that he would bring advice and encouragement rather than money, at a time of severe budget constraints back home.

Greece, mired in its deepest financial woes in decades, is on a cash lifeline from the IMF and larger members of the euro zone to prevent a disorderly default and an exit from the common currency bloc of 17 nations that use the euro.

Some analysts fear that if Greece leaves the euro it could be followed by Spain and Italy, causing the entire euro zone to collapse, and Biden reiterated Washington's strong desire to avoid that outcome.

"It is overwhelmingly in the interests of the United States that Greece works its way through this financial crisis and that it remains a strong and vital part of the European Union," he said.

Geithner is the main U.S. emissary on financial matters and has been central to President Barack Obama's effort to encourage euro zone heavyweights France and Germany to do whatever is needed to resolve the crisis - pressure that has been far from welcome in Berlin and Paris. Biden stuck to a deliberately optimistic view of the situation.

"I think that out of difficult times opportunities present themselves, and with a lot of hard work and a little bit of luck, a year from now we will have not only weathered this crisis, but even be in a stronger position. Let's get to work."

Earlier on Monday, Biden joked about bringing money to help Greece out of its deepest financial crisis in decades .

Greece's Papademos said he was confident Athens could count on the support of the United States.