Sarkozy, Merkel kick off week of crisis talks in Paris 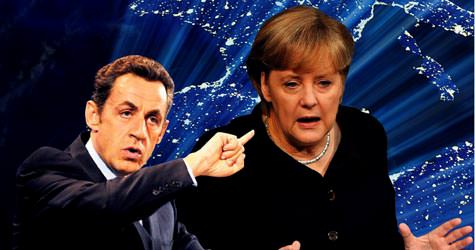 After individually outlining their views last week on closer fiscal integration, the two leaders must overcome remaining differences in order to fine tune proposals they want to present to EU leaders in Brussels on Thursday, on the eve of a summit.

The duo, increasingly dubbed "Merkozy" as they intensify bilateral efforts to restore confidence in the battered euro zone, will meet over lunch at 1:30 p.m. on Monday and are expected to hold a news conference afterwards.

They aim to agree proposals for more coercive budget discipline in the euro zone, likely via treaty change, which they want all 27 EU leaders to approve at Friday's summit.

The sticking point is that while Merkel wants euro states to surrender budgetary control to a European authority with veto power, which would require changing the EU treaty, France wants governments to have control of imposing sanctions on slackers.

While Germany, fed up with costly bailouts, wants a more federal EU system, Sarkozy is under fire five months from a presidential election from political rivals who accuse him of being ready to hand over sovereignty to unelected EU officials.

Bruno Le Maire, agriculture minister and a close aide of Sarkozy's, said that far from undermining French sovereignty, tightening budget control would restore confidence and reduce the power of markets to wreak havoc with public finances.

He said France was completely opposed to Berlin's idea of giving the European Court of Justice a veto on national budgets and said the role of Brussels should be to advise national governments to apply sanctions to each other.

"This is about building a European sovereignty that will make us stronger and guarantee the future of the single currency," he told Radio France Politique.

Analysts cautioned that opposition in other euro states to a more intrusive and stringent fiscal regime could yet derail a rescue plan that has eluded euro zone leaders for two years.

Several other governments, notably Britain, Ireland and the Netherlands, oppose treaty change for domestic political reasons and fear they would not win public backing in referendums.

"Investors would be well advised to adopt a cautious stance in the run-up to next Friday's EU summit," said Nicholas Spiro of debt consultancy Spiro Sovereign Strategy.

British Prime Minister David Cameron said following talks with Sarkozy in Paris on Friday that he was not convinced treaty change was needed and that if the EU's founding charter were reviewed he would ensure Britain's interests were protected.

Sarkozy will hold talks on Wednesday in Paris with U.S. Treasury Secretary Timothy Geithner, whose fourth trip to Europe since early September reflects U.S. concern about the euro zone.

Geithner visits Frankfurt and Berlin on Tuesday to meet Draghi and German officials. Later in the week he joins EU leaders at a political congress in the French city of Marseille due to be dominated by euro crisis talks and then heads to Milan to meet Italy's new Prime Minister Mario Monti.

Berlin and Paris are under unprecedented pressure to see eye to eye in a crisis that has split them on issues such as the role of the ECB in lending to troubled states and on the matter of whether the bloc should issue joint euro bonds.

Regarding another disagreement, over language in the euro zone's permanent bailout mechanism compelling bondholders to accept losses, sources told Reuters on Sunday that Germany was prepared to soften that reference to private sector involvement in line with France's wishes.

Sources close to Merkel have also said that depending how this week's talks go, she could overrule hostility from the Bundesbank and support the ECB stepping up its debt purchases from troubled euro states as a short-term bridging measure.

In terms of their push for closer fiscal governance, Berlin and Paris hope to short-circuit the complex treaty amendment procedure by wrapping their budgetary proposals into a single amended protocol. They hope to avoid a parliamentary convention and reduce the need for national referendums on ratification.

That position has angered some lawmakers, but they argue that the crisis is an emergency that requires swift action.