Gül: We are Europe’s rising crescent 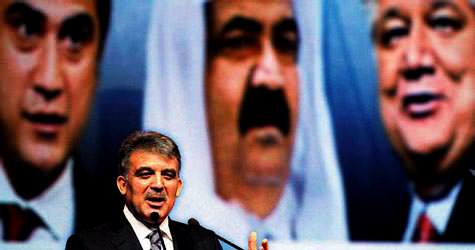 Stating that Turkey’s rising economy has made international reports, President Gül states, “In 2050, Turkey’s economy will have become the second greatest in Europe. We are Europe’s rising crescent.”

Prime Minister Abdullah Gül emphasized that from an economic standpoint, Turkey is Europe's rising crescent and a number of international establishments are well aware of this fact. Speaking at the opening for Turkey's Innovation Conference, Gül stated, "International consulting and finance institutions openly predict in reports that by 2050, Turkey's economy will be the second largest in Europe. The latest example was seen in reports from Goldman Sachs."
Emphasizing that in terms of brand and industrial design applications in recent years Turkey has become one of the top three European nations; Gül stated that as of the end of 2011, he expects Turkey to take the top spot in Europe for brand applications. Expressing that Turkey today with its strong macroeconomic foundation, has distinguished itself from Europe, which is dealing with a large public debt and a financial crisis, Gül went on to state, "It is now the time to place emphasis on micro reforms to increase the capacity for innovation."
Turkish Exporters Assembly Chairman Mehmet Büyükekşi states that innovation is the path to finding a solution to the accumulated structural issues in every area of life.
'YOU INSTILL TRUST'
Founder of Canadian telecommunication RIM, which produced Blackberry telephones and Co-chair Mike Lazaridis states, "Turkey's focus on innovation and education for the future, instills trust." Lazaridis said, "The Turkey that I see is a few generations ahead from the country it was when I was a child. In the past ten years there has been a noticeable change. The Prime Minister's commitment to innovation has opened the right path for growth in the future." Lazaridis also stated that the Fatih project will be a good investment for children's futures. Emphasizing that individuals in Turkey have great potential, Turkcell General Manager Süreyya Ciliv stated, "It is now Turkey's time. Big projects and successes will fruition with team efforts."
TURKEY AND QATAR SHOULD EMBARK UPON FURTHER COLLABORATION
Also attending the conference was Qatar ruler Sheikh Hamad bin Khalifa al-Thani, who stated that competition is the first symbol in the world of the basis of a free market and that it is this competitiveness which inspires the human mind to be innovative. Mentioning that they place as much emphasis on international collaboration as they do innovation Al Thani states, "We are not just talking about economics; we are also talking about science. We want to collaborate with Turkish universities and institutes. We want to there to be work between Turkey and Qatar."
Al Thani also announced that they are currently collaborating with Turkey on solar energy technology which is also developing mutual trust in relations. Mentioning that 2.8 percent of national revenue in Qatar is devoted to innovation, Al Thani states that over the past four to five years, they have made 350 million dollars of investments in innovations with a number of nations. Al Thani also went on to express his belief that the true actors in the development of humanity are not found in factories and universities, instead it is all of the talent and capabilities that are found within people themselves. According to Al Thani, knowledge through innovation promotes the development of self confidence as well as the principle of equality.