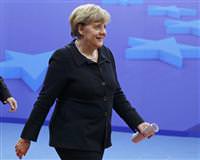 Europe secured an historic agreement to draft a new treaty for deeper economic integration in the euro zone on Friday, but Britain, the region's third largest economy, refused to join the other 26 countries in a fiscal union and was isolated.

The outcome of a two-day European Union summit left financial markets uncertain whether and when more decisive action would be taken to stem a debt crisis that began in Greece in 2009, spread to Portugal, Ireland, Italy and Spain and now threatens France and even economic powerhouse Germany.

A new treaty could take three months to negotiate and may require risky referendums in countries such as Ireland.

Twenty-six of the 27 EU leaders agreed to pursue a tougher budget discipline regime with automatic sanctions for deficit sinners in the single currency area, but Britain said it could not accept proposed EU treaty amendments after failing to secure concessions for itself.

"This is a breakthrough to a union of stability," German Chancellor Angela Merkel said. "We will use the crisis as a chance for a new beginning."

After 10 hours of talks that ran into the early hours of Friday, all 17 members of the euro zone and nine of the 10 outsiders resolved to negotiate a new agreement alongside the EU treaty.

Britain's few allies melted away in the Brussels dawn. All the other nine non-euro states said they wanted to take part in the fiscal union process, subject to parliamentary approval.

The rift, which could widen into a permanent divide between London and the continental mainland, occurred 20 years to the day after European leaders agreed at the Maastricht summit to create the single currency, with Britain opting to stay out.

Prime Minister David Cameron insisted at a news conference that it remained in Britain's interest to stay in the EU and take advantage of its single market.

One senior EU diplomat called Cameron's negotiating tactics "clumsy". Among other things, he had sought a veto on a proposed financial transaction tax, which may now be voted through by a majority over the objections of the City of London financial centre.

ECB President Mario Draghi called the EU's decision a step forward for the stricter budget rules he has said are necessary for the euro zone to emerge stronger from the turmoil.

"It's going to be the basis for a good fiscal compact and more discipline in economic policy in the euro area members," Draghi said. "We came to conclusions that will have to be fleshed out more in the coming days."

Two ECB sources said the bank's governing council decided on Thursday to keep bond buying limited to around 20 billion euros a week and there was no need to review the decision in the light of the summit outcome.

"You will see some further purchases but not the huge bazooka that some people in the markets and the media are awaiting," one central banker said on condition of anonymity.

"This means that each state can turn to its banks, which will have liquidity at their disposal," he said.

Analysts said the notion that commercial banks could step up their purchases of government bonds looked optimistic given the same banks are being asked to deleverage and recapitalize if necessary.

Merkel said the world would see that Europe had learned from its mistakes and avoided "lousy compromise".

Sarkozy sounded elated at having united a big group around the euro zone as the EU's core, long a French objective.

"This is a summit that will go down in history," he said. "We would have preferred a reform of the treaties among 27. That wasn't possible given the position of our British friends. And so it will be through an intergovernmental treaty of 17, but open to others."

One EU diplomat summed up the outcome as: "Britain seethes, Germany sulks, and France gloats."

Active ECB support will be vital in the coming days with markets doubting the strength of Europe's financial firewalls to protect vulnerable economies such as Italy and Spain, which have to roll over hundreds of billions of euros in debt next year.

The euro rallied in Europe and U.S. shares gained, but analysts said the summit had done little to convince markets that a solution to the crisis was at hand.

Asked if the euro was safe now, Polish Prime Minister Donald Tusk said: "I'm not sure."

Britain refused to allow its partners to amend the EU treaty, demanding guarantees in a protocol protecting BRITAIN OUTSIDE?

But European Council President Herman Van Rompuy, who chaired the summit, said the EU institutions would be fully involved in the new treaty, which would be signed in early March at the latest. The euro zone plus nine may hold a summit without Britain as early as January, diplomats said.

The rift may increase pressure from Eurosceptics within Cameron's Conservative party and outside it for Britain to hold a referendum on leaving the EU, which it joined in 1973. The prime minister strongly opposes such a course, which he has said would be disastrous for British interests.

Britain conducts more than half of its trade within the EU and could suffer on a broad range of financial regulation issues if the other countries decided to move forward as 26.

Van Rompuy said the summit's key achievement was to tighten fiscal limits, including the need for countries to bring budgets close to balance.

"It means reinforcing our rules on excessive deficit procedures by making them more automatic. It also means that member states would have to submit their draft budgetary plans to the (European) Commission," Van Rompuy said.

But a new treaty will take weeks of wrangling as countries like Finland and Slovakia oppose a Franco-German drive to take decisions on future bailouts by an 85 percent supermajority to avoid being taken hostage by a single small country.

In a meeting billed by some as a last chance to save the euro, the leaders also took several decisions on the permanent bailout fund, the European Stability Mechanism, which will come into force a year early in July 2012.

The ESM's capacity will be capped at 500 billion euros ($666 billion), less than had been suggested was possible before the summit, and the facility will not get a banking license, as Van Rompuy originally had proposed, due to German opposition.

It also was agreed that EU countries would provide up to 200 billion euros in bilateral loans to the International Monetary Fund (IMF) to help it tackle the crisis, with 150 billion euros of the total coming from the euro zone countries.

Cameron's decision to stay out of the treaty-change camp could spell problems for Britain. Deeper integration on the continent could involve changes to the single market and financial regulation, both of which could have a profound impact on the British economy.

"Cameron was clumsy in his maneuvering," a senior EU diplomat said. It may be possible that Britain will shift its position in the days ahead if it discovers that isolation really is not a viable course of action, diplomats said.