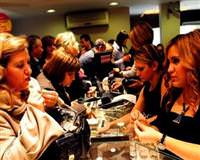 From the very first day of its opening, thousands of customers have been lining up in order to be able to enter Atasay’s Gold Tent (Atasay Altın Çadır). Customer’s are being let in 30 people at a time, and are allowed to shop for 20 minutes. In just one hour, the store sold 662 pieces of jewelry.

Both the revenue and number of visitors has doubled at this year's Atasay Gold Tent, in which the popular jeweler sells last year's items at discounted prices. The majority of products on display consist of solitaire rings and gold accessories and customers have been flocking in buses from cities close to Istanbul such as Eskişehir and Konya and even so far as Antalya. Atasay's Chairman of the Executive Board Cihan Kamer explains, "We are prepared this year after gaining experience from last year. By 14:00, there had already been 2,000 visitors to the tent." Mentioning that they are selling items that were in the store three to four years ago, Kamer states, "When it's crowded the instinct to buy something increases. Therefore, I didn't want to move this campaign out of the city and ruin its magic."Kamer also stated that as of today, they plan to increase security. "In the end, what they are buying is gold. This weekend will be especially crowded. Therefore we are going to have serve customers with police present."
FATHER WATCHES ON CAMERA
Cihan Kamer revealed that his father, Atasay Kamer was watching the tent live from the United States. "If he sees a customer complain, then he calls us and lets us know. He may be in the USA, but he is still in charge." According to Cihan Kamer's wife Çiğdem Kamer, in one hour's time, 662 pieces were sold. Cihan Kamer's son Atasay Kamer was also in the tent. Kamer also noted that this year women have been coming to the tent with their husbands and states that in this sale, they are totaling selling at a loss in terms of craftsmanship. Kamer states, "Men are buying prayer beads and rings and women are buying solitaire stones. Ninety percent of those customers that have come for this sale have never been inside an Atasay store before. There are people who have never bought a diamond in their lives."
PEOPLE ARE EVEN FLOCKING IN FROM OUT OF TOWN
* Security guards are admitting people into the tent in groups of 30 at a time.
* Once the 30-person group has shopped for 20 minutes, they are brought out of the store and a new group enters.
* The thousands of visitors that came in from out of town, took their numbers and waited for their turn to come up on chairs allocated for them in another tent set up on the side of the store.
* While they waited customers were offered tea, coffee and simit.
* The items sold in the tent went for 20 to 30 liras.
* The tent will be open December 9th, 10th and 11th between 08:00 and 22:00.