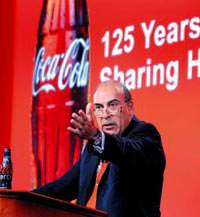 Coca-Cola Co moved the 125-year-old secret formula for its soft drink to its hometown attraction, the World of Coca-Cola, where it will be housed permanently for the public to view.

The formula had been in a vault at the SunTrust Bank in Atlanta for more than 86 years.

As part of its 125th anniversary, the soft drink company moved the formula to a vault it built at the World of Coca-Cola, and opened an exhibit called The Vault of the Secret Formula.

But the contents of the formula will not be made public at the new location.

Coca-Cola is the top-selling soft drink brand in the United States, and the Atlanta-based company is the world's largest soft drink maker.