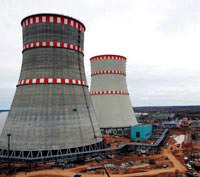 Construction of the first unit of Turkey's first nuclear power plant is expected to be completed in mid-2019, and the global financial crisis will not hit costs of the project, the Russian contractor company said on Friday.

"We are planning to finish construction of the first unit in mid-2019. Pre-construction work will start in the second half of 2012, and will take two years," Akkuyu NGS Power Production general manager Alexander Superfin told a press conference in Turkey's capital Ankara.

Atomstroyexport set up Akkuyu NGS Power Production in 2010 to build and operate the 4,800 megawatt nuclear power plant. The total investment is seen around $20 billion.

Turkey plans to construct three nuclear power plants of up to 5,000 MW each.

South Korea's Kepco pulled out of negotiations for a second plant at Sinop after Turkey refused sovereign guarantees for the plant's output. Japan's Tepco pulled out of the planned project in the aftermath of the Fukushima disaster.