A civilian boycott on France 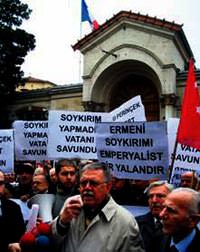 Turks are reacting to the resolution proposed by France regarding denial of Armenian allegations, which has brought the potential of a civilian boycott of French companies with operations in Turkey to the agenda.

Reactions to France's proposed resolution to make the denial Armenian allegations a crime continue to grow. With 8.17 billion dollars of imports from France and 6.05 billion dollars of exports from Turkey, the nation is now facing the nightmarish potential of a boycott of French companies operating in Turkey. A number of civilian organizations are warning that should the resolution be passed by the French parliament on Thursday, they may spread the call for a boycott on social networks.
BILL COULD HARM FRANCE
Noting that citizens may take on a stance based on national sentiments, Minister of Economy Zafer Çağlayan emphasizes that the passing of this resolution will harm France greatly. Çağlayan states, "French businessmen and citizens alike need to be aware of this issue. For us to make any move against French firms is not a possibility. We hold our French brothers who have invested in Turkey in very high esteem. However, we may face difficulties in relaying this to our citizens. Our citizens may adopt a different stance towards French goods based on national sentiments."
The Consumers Union, which conducted a boycott campaign in 2006 when France first passed the resolution accepting Armenian claims, is now also closely following developments.