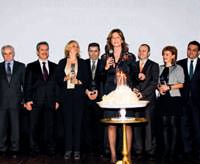 Çalık Holding Chairman of the Executive Board Ahmet Çalık was the recipient of the ‘Those at the Peak of Communications’ (İZ) special award for media. When receiving the award, Çalık stated “I am accepting this award on behalf of all of my friends.”

This year's award ceremony, the third held this year by the Advertiser's Association, celebrates those at the peak of the communications sector. This year's special award for the media category was awarded to Çalık Holding's Chairman of the Executive Board Ahmet Çalık. According to Aytül Özkan, Chairman of the Advertisers' Association Administrative Board, explains that the ceremony is held in order to commemorate advertisers, agencies and those in the production sector who help to establish a collective memory."We decided to hold this award ceremony in order to gain this very important element based in loyalty in our sector."
INNOVATIVE AND CONSISTENT
Aytül Özkan personally handed over Ahmet Çalık's İZ Special Award in media, and stated that Ahmet Calik, Çalık Holding's Chairman of the Executive Board was a courageous investor who always finishes what he starts. Mentioning that Çalık Holding has endeavors in a variety of sectors spanning from energy to telecommunications, from finance to textiles, Özkan stated "Ahmet Çalık, with his innovative and consistent ways is someone who has made his mark on our sector."
LOCAL NEWSPAPER AWARD GOES TO YENİ ASIR
This year's award for best local newspaper was awarded to Yeni Asır Newspaper. Receiving the award, Yeni Asır's Istanbul Representative Turgay Noyan stated, "The fact that our venture has many years of experience behind it is very important. Yeni Asır is celebrating its 117th anniversary. I am accepting this on behalf of all of my colleagues." This year's Media Event award went to the 'One Heart for Van' (Van İçin Tek Yürek) organization. Award-winning Television Producer's Association Chairman and atv General Manager Adem Gürses accepted the award.

'I SEE OUR TELEVISION SERIES PLAY IN 40 COUNTRIES'
Announcing that he was accepting the award on behalf of the entire Turkuvaz Media Group staff, Ahmet Calik, Çalık Holding's Chairman of the Executive Board stated, "When I look to see what sort of mark our media sector has made, I see that our television series are shown in almost 40 different countries."