A billion dollar gesture from Putin 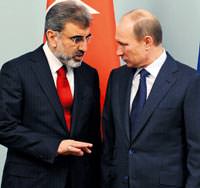 TURKEY gave Russia permission today to build the South Stream pipeline through its territory, supplying the missing piece needed by Moscow to secure markets for its gas in Europe at the possible expense of Brussels-backed rivals.

The South Stream project could jump ahead of the European Union-backed plan for the Nabucco pipeline to cut Europe's dependence on Russia by bringing gas from Azerbaijan and central Asia. It also would allow Russia to bypass Ukraine, in the past a pinch point for Russian gas on its way to Europe.

South Stream must pass through the territorial waters of Turkey, which is also a Nabucco participant, to reach southeast Europe.

"I would like to thank the government of the Turkish republic for its decision to permit construction of the South Stream pipeline in Turkey's economic zone," Russian Prime Minister Vladimir Putin said at a ceremony in Moscow.

It was an unexpected move by Turkey, one of Russia's biggest gas customers, which in November appeared to turn away from Russia when it announced it would not extend a contract with Gazprom, Russia's gas export monopoly for 6 billion cubic metres of gas per year.

In what appeared to be a package deal, Turkish Energy Minister Taner Yildiz provided the permission required to build the pipeline through Turkish territorial waters, while Gazprom Chief Executive Alexei Miller said the company would extend two longstanding gas deals that would effectively boost supplies to Turkey by 2 billion cubic metres (bcm) from 25 bcm.

Miller had met Yildiz in Ankara on Tuesday.

It was unclear whether Gazprom made concessions in exchange for South Stream.

After overestimating its gas needs in previous contracts, Turkey has been drawing far less than it had contracted under long-term take-or-pay deals. At the same time, it has been one of a growing number of consumer countries asking Gazprom to cut its prices.

Analysts say the project, for which Gazprom allocated around 10 billion euros in its investment programme for 2012-2014, is too costly and motivated by the desire to win political influence over Europe through supply links with strategic countries.

Gazprom owns 50 per cent of the South Stream project, which is designed to carry 63 bcm per year of Russian gas to Europe. Italy's Eni has 20 per cent, and France's EDF and Germany's Wintershall each own 15 per cent.

"I would like to express special gratitude to our Turkish friends for the constructive efforts and understanding, especially for prompt examination of all issues during the last days of the outgoing year," Miller said in a statement.

Turkey's acquiescence comes at a sensitive time for the region's energy producers and consumers, who are in the midst of charting a variety of routes for gas to flow to Europe from Russia and the Caspian Sea region for the coming decades.

Talks between Russia and Ukraine broke down this month after months of failure to reach an agreement on joint control of the pipelines that currently carry more than half of Europe's gas and have been used in the past as a weapon in price wars between Moscow and Kiev.

Ukraine lost leverage in the talks in November when Russia's new northern undersea gas route, Nord Stream, launched deliveries of gas direct to Germany, rerouting up to 27.5 bcm per year of gas from Ukraine's transit pipelines.

Before Nord Stream, Russia last year shipped around 110 bcm of gas via Ukraine, around 80 per cent of its flows to Europe.

Azerbaijan is due to decide on an export route for new gas from the second phase of the giant Shah Deniz gas field from a field of options including Nabucco, two routes through Greece which are in doubt because potential financing difficulties, and another proposed at the last minute by Shah Deniz partner BP .

Gazprom, which has in the past denied a link between the Ukraine talks and South Stream, changed its line after talks collapsed last week. The Russian company has suggested price concessions could be in the offing with a pipeline deal, a potential boon to Ukraine's stretched finances.

In the past, price disputes with Ukraine have come to a head at the beginning of the new contract year on Jan. 1, although Russian and Ukrainian officials have repeatedly said there was no prospect of a New Year's "gas war" this year.