Praise is not enough, up the note 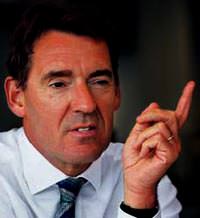 After four months of publishing negative reports on Turkey, Goldman Sachs economist Jim O’Neill’s comments of praise yesterday has risen expectations of a note upgrade by their credit rating agencies.

In July and October, the international investment bank Goldman Sachs (GS) drew a pessimistic picture of Turkey's economy and reports stated the nation may face recession. However, just two months later they are now bestowing praise on Turkey's economy.
Chairman of Goldman Sachs Asset Management, economist Jim O'Neill stated that if the G8 were being formed today and if economic criteria superseded political affluence, then in addition to BRIC, he would suggest Mexico, Indonesia, South Korea and Turkey.
EXPECTATIONS OF A NOTE INCREASE
The creator of the term BRIC, in reference to the nations with the highest growing economies, namely Brazil, Russia, India and China, O'Neill's aforementioned announcement followed a suggestion to sell bank shares in Goldman Sachs' reports. When taking into consideration this change in the bank's outlook coupled by their partnership structure, the expectation for a note increase surfaces. As is known, amongst the banks' partners are some of the owners of the world's largest investment funds and rating establishments. Almost 30 percent of Goldman Sachs, which is a partner of both Moody's and Standard & Poors, is owned by James F. Rothenberg's Capital World Investors and John C. Bogle's Vanguard group.

SAME PARTNERS AS MOODY'S AND S&P
SABAH's recent coverage of Goldman Sachs has revealed that the ten firms that own 30 percent in shares are almost identical to those who own rating establishments Moody's and S&P, a fact which has resulted in altering expectations. In addition, Goldman's praise has also contributed to increased expectations of an affirmative note change.
TURKEY WILL BE ONE OF THE TOP TEN
Another finding by Goldman Sachs economist O'Neill is that developing nations have experienced growth from three trillion dollars to 13 trillion dollars. "This means a new USA. Their share in the world's GDP has gone from eight to 18 percent," states O'Neill, "This is extremely impressive. Within a few years' time they will all be bigger than the U.S." O'Neill went on to express that in his opinion, Turkey is a candidate to becoming one of the most exciting nations amongst the N-11. He also stated that within the next ten years, Turkey will be one of the top ten contributing nations to the global GDP.
THE CREATOR OF BRIC AND MIST
Goldman Sachs' Asset Management CEO and Economist Jim O'Neill was previously at the head of the bank's economic, stocks and strategic research departments. Famed for his creation of the term BRIC to denote the world's fastest growing economies, namely Brazil, Russia, India and China, O'Neill was also the one to establish the term MIST (Mexico, Indonesia, Korea and Turkey). Meanwhile, O'Neill is also on the executive board for the Bruegel international economy think tank.