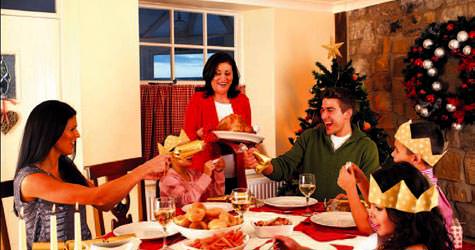 According to MasterCard's MasterIndex research, 75% of the Turkish public will be spending New Year’s Eve at home. Four percent of Turks however will be ushering the New Year from out of town.

A MasterIndex Research conducted by MasterCard surveyed over a thousand people in 11 provincial centers representing Turkey's urban population, on how they plan to usher in the New Year, also revealing shopping trends for New Year's Eve. According to the research, a majority of Turkey (75%) will be spending New Year's Eve at home. If those visiting relatives staying with family are also considered in this category, then the figure for Turks spending New Year's Eve at home increases to 86%. While four percent of the public plans to spend the evening out, another four percent will be going on out-of-town holidays. One percent plans to spend the holiday abroad. Two percent plan to spend New Year's Eve with their friends, while five percent will usher in the New Year from work.
The number of those planning to spend New Year's Eve at home increases with age. While 62 percent of those aged 25-29 plan to stay at home, the figure increases to 76 percent of those aged 33-44 and to 85 percent for those aged 45-54 who will also be spending the night in. As the socioeconomic level decreases, the rate of those spending the evening at home increases. While 57% of the high income group surveyed stated they would be at home for tonight's celebrations, the figure for those in lower income groups increases to 88%. Accordingly, 13 percent of those questioned from the higher income group revealed plans to celebrate the New Year out of town while out of the lower income group that figure drops to one percent. The same trend was also visible for those planning to spend New Year's Eve outside of the country.

AVERAGE BUDGET AT 165 LIRAS
On a region-based inspection of the data collected, the rate of those spending the evening at home in the Marmara Region is at 78%, while in the Eastern Anatolian Region, this figure increases to 88%. According to the survey, 59% of the Turkish public hits the shops especially for the New Year. Out of the shopping conducted, 47 percent spend money on food and drinks, 25 percent spend money on gifts, ten percent on clothes, nine percent on entertainment, six percent on films and three percent spent money on music cd's. The average budget designated by the Turkish public on New Year's Eve is 165 liras. As the income level of those questioned decreases so does the budget designated. Those surveyed in the high income group spend 347 liras on average, while those in the lower income group spend 95 liras on average.

WOMEN SPEND MORE
According to the research; gifts were purchased for three people at 71 lira each on average. While this rate increased to 88 liras for women, it decreased to 55 liras for men. As the income level of participants increased, a rise in the amount spent on gifts was also observed. The average budget designated for gifts by the high income group was 139 liras, whereas for those questioned in the lower income group that figure drops to 44 liras.