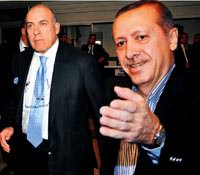 While paying a visit to Prime Minister Erdoğan, Coca Cola CEO Muhtar Kent also offered a surprise invitation to Davos. Kent told Erdoğan, “We are moving Davos to Istanbul this year and we want to see you amongst us.”

Prime Minister Erdoğan welcomed Coca Cola CEO and Chairman of the Executive Board Muhtar Kent. During the meeting, Kent made an interesting proposal to Erdoğan regarding Davos, which in 2009 the Prime Minister left saying he would never return. Coca Cola CEO Muhtar Kent told Erdoğan, "We are moving Davos to Istanbul this year. We want to see you amongst us." Kent met with Prime Minister Tayyip Erdoğan for approximately half an hour and invited Erdoğan to the meeting which will be held in Istanbul from June 4th to the 6th. The World Economic Forum, otherwise known as the Davos Summit, which is held every January in the Swiss town of Davos, will be holding the "Europe, Middle East, North Africa and Central Asia Meeting' in Istanbul from June 4th to the 6th, 2012. Kent will be co-chairing the summit.

ZAPSU ACCOMPANIES KENT
The meeting in Istanbul will be held with wide participation. For the first time ever, the MENA nations, which denotse countries from the Middle East and North African, will be participating in the meeting for the first time. Kent, who was joined by AK Party Founding Board Member Cüneyt Zapsu on his visit to Erdoğan at the Prime Ministry building, extended a second invitation to Erdoğan to attend yet another meeting to be held in Istanbul. Kent expressed to Erdoğan how pleased he would be to have Erdoğan join the Global Summit of the Consumer Goods Forum which will be held in Istanbul on June 20th. Muhtar Kent also relayed his wishes Erdoğan have a safe recovery following the surgery he underwent over a month ago.

THE BENEFIT OF ONE MINUTE
Explaining that the World Economic Forum, which previously was held in Davos, will now be coming to Istanbul every year, Zapsu stated, "This isn't a one-time thing. If you recall, two regional meetings had been held in Turkey previously. One was in the 90's and the other was a few years ago, however this is a very different sort of meeting. Zapsu also added, "It seems the product of the 'One Minute' incident may not have been so bad in some aspect."