We respect the headscarf and we apologize 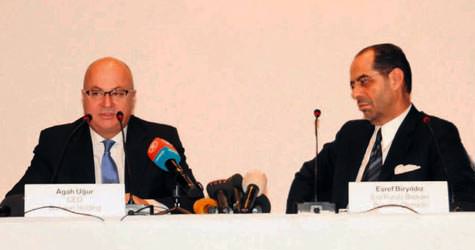 After surfacing to the agenda in a headscarf crisis last week, Borusan Holding CEO Agah Uğur has now issued an apology.

Uğur states, "No matter what language, religion, race clothing or lifestyle someone embraces, we apologize to the entire public."
It all began when BMW brand's Turkey distributor Borusan Otomotiv issued an 'image warning' when rally driver Burcu Çetinkaya test drove a Mini Cooper brand vehicle with journalist Merve Sena Kılıç, who happened to be wearing a headscarf, on a program supposedly sponsored by the firm. Since then, in response to significant backlash, Borusan Otomotive has not only released full page ads in newspapers but also held a press meeting yesterday in which Borusan Holding CEO Agah Uğur and Borusan Otomotiv Executive Board Chairman Eşref Biryıldız responded to the allegations.
THERE HAVE BEEN ONLY THREE CANCELLATIONS
Calling the accident a 'road accident', CEO Uğur states, "With the press as our witness, we apologize to our citizens, no matter what language, religion, race, belief, clothing and lifestyle they embrace." Drawing attention to the fact that ever since the crisis surfaced they have received a significant number of reactionary responses via social media and other outlets, Uğur states, "We have been following developments all week. Because, for a company with 66 years of experience, this is a first and an upsetting situation. At present we have only received information of three cancellations for automobile orders, two of which came from Istinye and one from Adana. Other than that, we have not received any other cancellation applications. However, what we have been through has also become the start of a new era for us."
WE WILL PROVIDE CORPORATE TRAINING
When asked by SABAH, 'Are you considering offering corporate training to employees from branches throughout Turkey in regards to the reactions that have developed on this issue?' Uğur responded by stating, "We are expecting for this incident to come to a conclusion and an end. This is the reason behind our holding this press conference today. We have a stance which pays attention to and cares about everyone's sensibilities. However, we are closely following the reactions that could develop in response to this issue and are cautiously following the criticisms that have surfaced. Through offering corporate training, we will explain the company's perspective on headscarves and beliefs."
BRAND MANAGER RESIGNS
During the press meeting, Borusan Holding CEO Agah Uğur expressed their apology to the public for the event that transpired. Agah Uğur began his address by mentioning the Borusan advertisement released in a number of newspapers which offered an apology to the public and stated that they in no way discriminate. Agah Uğur also explained that they have conducted detailed research into the issue and that they do not have any sponsorship agreement with the 'Otomobil Sevdası' (Love of Automobiles) program in question. In addition, Uğur emphasized that they regularly supply vehicles to the program and will continue to do so. Agah Uğur went on to state that they had held sponsorship negotiations with car racers which were mismanaged and therefore, brand manager Hakan Bayülgen had made an unauthorized announcement to the press and has since resigned due to his release of statements that are definitely not in line with Borusan's doctrine or principles.
REVENUE OF 4.2 BILLION $
Drawing attention to the group's 66 years of experience and 4.2 billion dollar revenue, Agah Uğur stated: "We have 5,5000 employees and 800 million dollars of exports. Over the years, with the added value we have provided for Turkey, the taxes we have paid, the investments we have made for dozens of schools and to cultural and arts activities in addition to social responsibilities, we have been an example for Turkey. In 2011, we made close to 300 million dollars in investments in Turkey. Human rights, equality, respect and transparency lies at the center of our values."

WHAT HAPPENED?
According to claims, when former brand manager Hakan Bayülgen saw an article released in the press on December 20th on Burcu Çetinkaya under the headline 'Dubai çöllerinde iki güzel sarışın' (Two beautiful blonds in the Dubai desert), he responded to Çetinkaya by using words to the likes of, "We are the sponsors of your program. We saw a woman wearing a headscarf standing next to the Mini Cooper vehicle. This has created an image problem for us. They do not want this overseas."