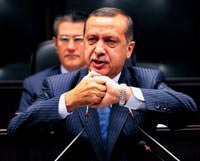 Prime Minister Erdoğan delivered good news to those in Van as the government has allocated an additional two billion dollars in aid for the earthquake-struck region. Erdoğan also criticized those wrapped up in speculation, “I am now like Diogenes, walking the streets with a gas lamp in my hand seeking an honest man, however unfortunately there is no one.”

During Recep Tayyip Erdoğan's first group address of the year, one of the main issues he discussed was regarding sending further aid to Van.
Stating that following the earthquake in Van speculation has surfaced inferring that the government was apathetic, Erdoğan went on to refer to the famous philosopher Diogenes who would walk the streets in the daytime carrying a gas lamp in his hand as he sought out to find an honest and virtuous man. "I am like Diogenes, wandering the streets with a lamp and seeking an honest man, however unfortunately there isn't anyone." Explaining that numbers of ministers and deputies are continuously going to the region, Erdoğan states, "We are coming from the bottom of our hearts to our beloved people, whereas they are coming from the side…That's the difference."

TWO BILLION LIRAS MORE TO VAN
Erdoğan delivered good news to the earthquake victims in Van yesterday, announcing that the two billion liras remaining in the 2011 budget will also be allocated to the region. Erdoğan noted that the foundation has been laid for 3,984 permanent residences in the region and efforts are ongoing on a tender for 11,000 residences. "Hopefully by the end of this month there will no longer be such a thing as a tent city and they will all be transformed into a container city," stated Erdoğan.
ONE TRILLION DOLLAR INCOME
Explaining that despite the economic crisis in Europe, Turkey displayed an economic performance last year that was followed in admiration all over the world, Prime Minister Erdoğan stated, "The three-term national revenue has reached 589 billion dollars. The national revenue for the retroactive four-term period was 793 billion dollars. This means that we have reached the figures prevalent prior to the economic crisis in 2008 and in fact we have even surpassed those figures and are coming close to reaching the one trillion dollar national revenue level." Erdoğan also announced that over the past year, unemployment figures have regressed to record level low, growth has increased to 9.6 percent and export figures have broken a record.