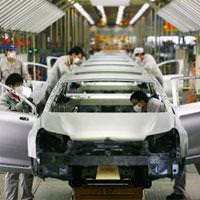 The country had a trade surplus of $183.1 billion in 2010. According to Reuters calculations, China recorded a surplus of about $21.6 billion in December, a four-month high and a sharp rise from November's $14.5 billion.

If that number is accurate, it would be well above market expectations. A Reuters poll o f 23 economists forecast China's trade surplus to fall to $ 8.8 billion in December as weakening global demands hurt Chinese exports.

Chen said in a statement on the M inistry's website that the world econom y faces a "stern and complicated" situation this year and that any recovery would be slow and likely to fight huge headwinds.

The United States has urged Beijing to keep China's trade surplus share of GDP below 4 percent, although that proposal has been rejected by the Chinese government.

"China has achieved balanced and stable development of foreign trade in 2011," Chen said.

China's customs administration is scheduled to publish trade data for December and all of 2011 on next Tuesday.

Chinese officials and analysts say the country's massive export sector will face a challenging 2012 due to a weak global economy caused by the Europe debt crisis.

China, also the world's second-largest importer, has targeted annual 10 percent growth in its trade turnover through 2015.