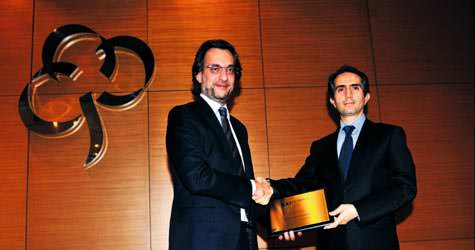 Çalık Holding's work in business solutions has reaped an award from SAP. Çalık Holding was the recipient of a ‘Gold Award’ in the 'SAP EMEA Quality Awards'.

Every year, SAP awards companies that successfully implement projects and programs in a manner that provides significant gain. With applications that come in for candidates from Europe, the Middle East and Africa (EMEA) nations for the Quality Awards, Çalık Holding received the honor in 2011 with his innovative IS-Media solutions project.
IS-Media solutions (IS-Medya çözümü) is the first and sole application as such in Turkey and has brought Çalık Holding a Gold Award in the 'SAP-EMEA Quality Awards'. During a ceremony held at the Çalık Holding, SAP Turkey Professional Services Director Ozan Ersen handed the award to Çalık Holding Information Technologies Director Ebubekir Şimşek. The SAP-Çalık Holding project is attention-drawing due to its being the first ever SAP IS-Media implementation project in Turkey. The project, which was brought into application through the collaboration of Çalık IT and SAP Consulting over 15 months' time, is at the same time Turkey's first revenue realization implementation.