Ferraris of the sea go to China 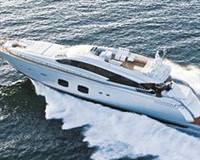 Chinese machinery maker Shandong Heavy Industry Group is set to buy a controlling stake in debt-laden Italian yachtmaker Ferretti in a deal worth about $500 million, sources close to the deal said on Friday.

The deal is expected to be signed on Tuesday in Jinan, capital of China's eastern Shandong province, they told Reuters.

"The size of the deal is close to $500 million," said a source, who asked not be identified as he was not authorized to discuss the deal with the media.

The Chinese government has said it wants companies to acquire top global brands as a short cut to improving their reputations.

Ferretti, which owns the Pershing, Riva and Ferretti Yachts brands, last year signed a non-binding memorandum of understanding with Shandong Heavy for a joint venture, with the aim of developing a partnership to design and sell motor yachts in greater China and other emerging markets.

Shandong Heavy would evaluate the possibility of making a cash investment in the group, Ferretti said in July.

The sources declined to disclose exact terms of the deal.

The Financial Times reported last month that Royal Bank of Scotland Plc, Oaktree Capital Management LP and Strategic Value Partners were among lenders that had agreed to sell their claims to Shandong Heavy.

The deal will see the yachtmaker's debts reduced from 685 million euros ($876.32 million) to 116 million euros, while it receives 180 million euros in additional funding, FT said.