We will not work the interest lobby 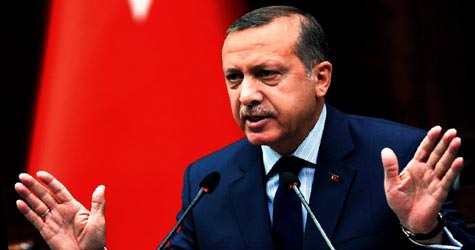 Expressing that the interest lobby is staging an attack against Turkey, Prime Minister Recep Tayyip Erdoğan states, "We will deliver the necessary harsh responses against the interest lobby. We will not let this lobby for interest operate this comfortably.”

Prime Minister Recep Tayyip Erdoğan expressed that he would not be allowing the interest lobby entry. Paying a visit to the Prime Ministry Press Center for Working Journalists' Day, Erdoğan stated, "We had problems this year with the current account deficit and as you know of course later on the current deficit fell into place. However, right now there is an interest lobby attack. We will be delivering the necessary harsh responses to the interest lobby. Because, we will not let this lobby for interest operate this comfortably."
IF INTEREST DROPS, INFLATION DROPS
Erdoğan stated that should the interest lobby operate mercilessly, then the purchasing power of citizens who are consumers will drop, which will result in entrepreneurs being forced to lessen investments.
Prime Minister Erdoğan commented: "Because, as you can see, loans are offered at very high interest rates. If you look at politics interest, its 5.8 percent, meanwhile, the market interest ranges between 13 and 14 percent. In other words, at the moment the situation is now wide open and we need to close it. Therefore, inflation should be as high as the level the market interest is. I don't pay much attention to the others. However low we can drop the market interest, that's how low inflation will be. When the market interest increased to 14 percent, inflation went up to 10.45 percent."

The third bridge will not break down
Offering an assessment on the tender to be held for the third Bosphorus bridge, Erdoğan stated the following: "The gentlemen say let's work more and they want a time extension on the tender. There are no three months or six months. Sometimes they reach an agreement amongst themselves, and that could be where this comes from. There are definite customers for the third bridge. The third bridge will not break down. The worst case scenario is that we will build the third bridge using the national budget; I mean we do have that strength.
I don't differentiate between Istanbul and Ankara
When a journalist commented, "You look happier in Istanbul", Erdoğan replied, "More so than happiness, my doctors and such are there and so I have to at least spend the weekends with them. Also, for me there is no longer an Ankara, Istanbul divide."