In September, businessmen go to conquer our neighbors 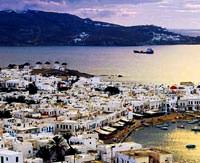 The Greek Business Federation will be organizing a trip to Greece for almost 200 Turkish businessmen to participate in 50 billion euros worth of privatizations.

In order to overcome the economic crisis, Greece has decided to privatize public assets and will be hosting Turkish businessmen in September for an anticipated 50 billion dollars worth of privatizations.


According to Burcu Akdarı, Chairman of the Young Administrators and Businessmen Association (GYİAD), following Greece's open invitation to Turkish businessmen made last November, they established a working group to participate in Greece's invitation. A trip was planned for May and then later delayed to September due to the Greek elections.

Akdarı states, "The Greek-Turkish Business Council Chairman Dimitris Papanicolaou had invited us to participate in a joint summit on the Greek Islands in May in an effort to further inform the Turkish business world and ensure they were more involved in the upcoming privatization process. The government in Greece is changing in April. Therefore, we moved our trip planned for May to September."

Explaining that they plan to visit one of the Greek Islands with a group of approximately 200 businessmen, Akdarı states, "We are interested in both large and medium-scale privatization projects."

EVERYTHING IS FOR SALE

Greece's Hellenic Federation of Enterprises, or SEV, Coordinator Ioannis Patsiavos explains, "We will be holding privatizations worth a total of 50 billion euros, including 29 airports, with the Athens Airport at the forefront and including state banks, ports, marinas, golf fields and hotels. We want the Turkish business world to also benefit."