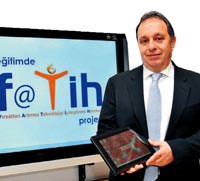 All public elementary and high schools will soon be using interactive digital screens instead of white boards.

Vestel, the winner of the Ministry of Education's FATİH Project, will be bringing the 'smart boards' to schools by August.
Vestel, the winners of the tender held for the interactive digital boards as part of the Ministry of Education's FATİH Project, which aims to instill efficient usage of information technologies in educational and instructional activities, plans to instill the system of smart boards in state schools within the next eight months. Bidding 339 million, 525 thousand TL for the first phase of the tender, Vestel will be taking on the manufacture of 85,000 interactive digital boards, aka 'smart boards' for public schools. Vestel Companies Group Chairman of the Executive Board Ömer Yüngül explains that 200 of the 85,000 smart boards to be manufactured will be placed in classes in February, and the remainder will be in classes within the next eight months.
Mentioning that with the LCD module investments and Research and Development endeavors conducted over the past few years, they now have the necessary technology and production capacity to produce smart boards, Yüngül states, "Based on this concept, we produced smart boards and promoted them for the first time at last year's CEBIT fair."
Explaining that they have installed a touch screen in the LED screen and by using a PC main card the product is transformed into an interactive board that without the use of any sort of pen, writing can be done by hand; Yüngül states that the smart board is also compatible with a variety of Vestel's software.
COVETING ABROAD
Stating that they intend to take the project abroad and that there are over 3.6 million smart boards in use all over the world and that the market value of this figure is 1.4 billion dollars, Yüngül goes on to state, "The most important markets are in Europe, the Middle East and African nations."

WE COULD BUY A LOCAL BRAND
Ömer Yüngül also stated that in 2012, they could buy a local brand in Europe and the Middle East. Yüngül states, "Purchasing will be directed at that specific country's domestic market."
Noting that their revenue target for this year is 3.5 billion dollars, which they will earn from the FATİH project and does not include other possible tenders, Yüngül states, "As for investments, we have set aside a 100 million dollar budget for 2012."