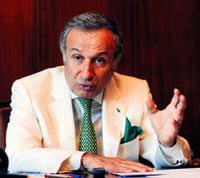 The French Senate vote on the Denial Bill of the so-called Armenian ‘genocide’ has already affected semester break vacations to France. In general, every year 2,000 tours are sold to Paris-Disneyland; however this year that figure has dropped to just 200.

The French Senate vote has already reaped results in negatively affecting tours purchased for France. In general, 1,500 to 2,000 tours to Paris-Disneyland are purchased for the semester break. This year however interest has dropped by nearly 90 percent.

Prime Minister Recep Tayyip Erdoğan's words stated prior to the Senate vote when he asked, "I wonder if people will still visit France if the bill is passed? That could be something to consider," has seen evident results in the tourism industry.

After last night's vote by the French Senate, tour operators will be offering their support of the government's stance by cancelling tours to France.

Turkey's Travel Agencies Association Chairman Başaran Ulusoy states, "When it comes to national sentiments, our citizens will do what is necessary."

Anı Tour Executive Board Chairman Veli Çilsal states, "This has become a national issue. The Denial Bill has also affected us in the tourism industry. Sales of France tours are practically nonexistent. We used to have tours every week. Flights continue to operate, however demand for tours has dropped to the ten percentile level."

Çilsal explains, "a number of people who had made previous reservations, did end up going on the tours in order to not lose the money they had invested, however when it comes to new reservations, they have decreased significantly since the start of the year."

Jolly Tur General Manager Figen Erkan states that in the future, holiday-goers may veer their interests to other nations. Erkan also expressed that people may have also been affected by the protest marches staged by Turks in Paris.

Every year approximately 10,000 people from Turkey purchase package tours to France. Every semester break the average number of trips to Turkey ranges between 1,500 and 2,000. Two-night stay tours in Paris start off from 489 Euros, while two-day tours to Paris Disneyland start from 629 Euros per person.
Expressing that they stand behind the Prime minister's comments, Çilsal states, "The effects are not just evident in the tourism industry, but have also surfaced in all sectors. We are also protesting."