President Gül: There are Turkish contractors all over the world 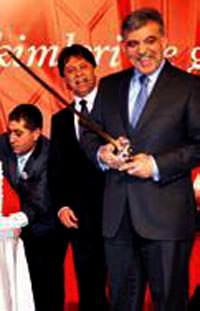 President Abdullah Gül attended a reception held for the 60th anniversary of the founding of the Turkish Contractors Association.

Expressing that contractors have made the most contribution and effort to Turkey's development, President Gül stated that they are prepared to provide all forms of support for Turkish contractors to take on international projects.

Noting that when he looks around at the surrounding environment he sees Turkey's advancement and development, President Gül stated that this has been realized by the hands of Turkey's contractors.
Gül went on to state, "When we see the great works done in the countries we visit, this makes us feel a separate sense of happiness. It is no longer solely the embassies that wave Turkey's flag abroad, you also wave that flag. When I was the Minister of Foreign Affairs, from time to time people would ask me, 'How many representatives do you have in Moscow? We see the Turkish flag everywhere.' When they didn't know why, we would tell them about all of you."

President Gül used a sword to cut the 60th anniversary cake and later distributed plates to former chairmen of the Turkish Contractors Association executive board.