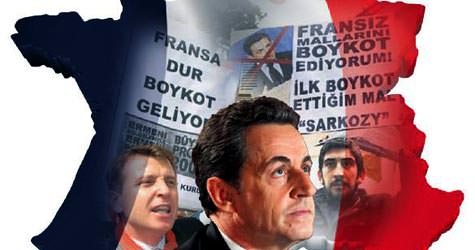 The protest of the Armenian bill has resulted in a 34.4% drop in French imports compared to the same period of the year prior. The increasing reactions have at present resulted in a monthly detriment to Sarkozy of 356 million dollars.

The draft passed by the French Parliament which deems criminalizing the Armenian allegations of a so-called 'genocide' has slowly begun to result in an increasing financial bill incurred by France. Import figures from France for December, 2011 regressed to 678,946,000 dollars, which is a 34.4% drop compared to figures from the same period the year prior.

As a result, Nicolas Sarkozy's 'Armenian bill', which he put forth in order to gain favor in the upcoming elections, has resulted in costing France 356 million dollars in one month alone. According to foreign trade figures from the Turkish Statistical Institute (TÜİK), in 2011, Turkey's exports to France increased by 12.5%, surpassing 6.8 billion dollars. Export figures from December of last year decreased by 12 percent, compared to the same time period from the year prior, and regressed to 543,387,000 dollars.

ELEVENTH LARGEST MARKET
According to figures from the Foreign Economic Relations Board (DEİK), during the 2011 January to November period, Turkey was the top 11th country to export goods to France, and the top 16th country to receive French imports. During the same time period, Turkey consisted of 1.64 percent of France's total exports, while Turkey provided for 1.17 percent of France's total imports.

FRENCH FIRMS ARE TRYING NOT TO DRAW ATTENTION

According to information obtained, following France's approval of the 'denial' bill, French firms operating in Turkey received an order to 'not draw attention'. According to an article in France's Le Monde, businessmen are concerned that the joint trade volume, which had reached 12 billion euros in 2011, would incur harm due to the tension which has surfaced in diplomatic relations over recent years. A high-level official at TEB, BNP Paribas' Turkish partners, relayed to Le Monde that they had received an order to 'not draw attention!' At present, there are 400 French-based firms operating in Turkey with over 100,000 employees.