Exports up by ten percent 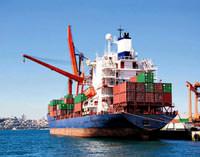 Turkey’s exports have started off 2012 on an incline.

January figures showed a ten percent increase, with total exports reaching 10.5 billion dollars. According to Turkish Exporters Assembly Chair Büyükekşi, it is the high morale from the record exporting figures in 2011 that allowed for the year to start off well.
The Turkish Exporters Assembly (TİM) has released the first export figures of the year. January's numbers showed a ten percent increase, reaching the ten billion, 554 million dollar level. Automotives remain the driving force of exports at 1.6 billion dollars and is followed by the chemical and steel industry.
The ready wear and garment sector lost its top third spot and regressed in exports by 4.23%.

Meanwhile, exports in European countries also dropped by one percent to 4.6 billion dollars. The EU's shares of total exports have decreased to 43.6 percent from last year's 48.3 percent figure from the same month.

Exporters' market diversification efforts have managed to reap fruitful. Exports to the Far East, South America and Africa have increased. African nations alone have seen a 23 percent increase in exports. While Germany is the top nation Turkey exports to, Iraq and England follow. Meanwhile, exports to France have decreased by three percent since the French Senate vote on the 'denial' bill. The jeweler sector experienced the highest rise in exports for January at 223.61 percent.

Expressing that 2012 has started off well, TİM Chair Mehmet Büyükekşi states, "The high morale and motivation from 2011 has been influential in this factor." Despite Europe suffering a drop in exports, other nation's efforts at market diversification has resulted in a continued increase in export figures, states Büyükekşi, who goes on to note that with the TL's valuation at competitive levels, imports have also stabilized. Büyükekşi goes on to state: "The lira will not be allowed to appreciate at extreme levels. The red line on the dollar for exporters is between 1.70-1.80. Extreme volatility is damaging for exporters. For us, we say 2.10-2.15 should be the exchange basket."