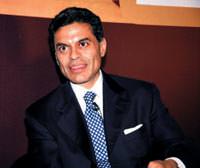 One of CNN and Newsweek's most distinguished journalists Fareed Zakaria has offered up praise for Turkey.

Fareed Zakaria, the famous author, journalist and television host of CNN's Fareed Zakaria GPS, delivered the following words of praise for Turkey.
"Twenty years ago Turkey was a fragile democracy, dominated by its army, with a weak economy repeatedly in need of Western bailouts. Today, Turkey has a trillion-dollar economy that grew 6.6% last year. Since April 2009, Turkey has created 3.4 million jobs — more than the European Union, Russia and South Africa put together. That might explain Prime Minister Recep Tayyip Erdogan's confidence and his country's energetic foreign policy."

Zakaria also states that the age of 'unipolarity' is over, and emphasized the economic strength that a variety of nations are now capable of achieving. Zakaria uses the examples of countries such as China, Turkey, Brazil and India and stated that these rising powers on every continent also provide political stability and economic growth.