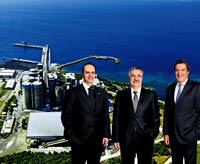 Sabancı Holding's cement group has diversified exports with South America due to the effects of the Arab Spring. Twenty-five percent of the group’s 2011 cement exports went to Brazil and its surroundings.

When it comes to the light in weight but heavy in value cement exports, the Arab Spring has resulted in transporting exports overseas. When exports dropped to nearly nil in the Middle East and the North African region, which provides 50 percent of the nation's exports, Turkey began sending cement to South America.
A series of Sabancı Holding's cement firms have since begun exporting to Brazil by ship. Akçansa General Manager Hakan Gürdal, "When 300 kilometers' distance is added to transporting exports, a certain cost is incurred. Last year, we exported from our own port to South America by ship. With the drop in freight fares, the cost per ton is now 22 dollars. Twenty-five percent of exports in 2011 were done in this region. Meanwhile, another nation that has helped lessen the drop due to the Arab Spring is Russia, as our exports to Russia have increased."
REVENUE UP BY 22 PERCENT
Gürdal explains that as a company, they are planning to make a total 125 million liras investment in 2012. "We continue to seek out a new market in exports. When looking over figures from the past nine months, we see that there has been a 20-22 percent increase in revenue compared to the year prior."
Çimsa General Manager Mehmet Hacıkamiloğlu also shared that the company saw a 16 percent growth over the first nine months of 2011 and that they anticipate similar levels for the final annual figures. "We are aiming to spend 100 million liras in investments for 2012."
2012 EXPECTATIONS
% 4-4.5 growth in the cement sector
% 5-6 growth in the construction sector
56.1 million tons cement consumption
763 kilo per person cement consumption

Göçmen: Our revenue target for this year is two billion liras...
Expressing that they are following a policy of growth alongside Akçansa and Çimsa on domestic and internal purchases and sales, Göçmen goes on to state, "We have a two billion liras revenue target in 2012. With the consumer growth in the cement sector, we may see growth in the four to 4.5 percentages in 2012." Göçmen also stated that they are currently in deliberations on purchasing and sales for all countries within a two hour flight radius of Turkey.