“We will be establishing Turkish trade regions” 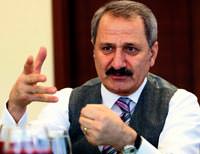 Cities in Turkey that dominate in global trade will soon be designated as “Special Turkish Economic Zones”. Sharing their plans with SABAH, Minister of Economy Çağlayan explains that these zones, which focus on trade and tourism, will be duty-free.

Economic Minister Zafer Çağlayan paid a visit to SABAH, in which he explained a number of plans on the agenda to further promote Turkish trade zones. Explaining that there are a number of new projects currently in development geared towards increasing Turkish companies' competitive power in international trade, Minister Çağlayan reveals they will soon be establishing a series of "Special Turkish Economic Zones." Çağlayan also expressed the importance they place on supporting SME's, and stated, "The door is wide open when it comes to the program. I am inviting all Ministries who have related projects."
Minister Çağlayan discussed the point they have currently reached in their incentive package and the new steps they plan to take for the nation's economy:

INITIATIVE WITH LITHIUM FIRMS: Lithium is mandatory for electrical automobiles. We do not have a proof of reserves; however there are so for Afghanistan, Chile and Zimbabwe. If we are going to embark on domestic production, then I have to ensure a source of lithium that will provide the security of supply. I will be staging an operation with firms in order to acquire this resource.

TURKISH ECONOMIC RELATIONS: We will be establishing "Turkish Special Economic Zones with a number of nations. It may be with China, Russia or India. New Zealand, Australia and Canada have already secured a significant region. Even certain areas of Africa… Africa has been completely closed off. We are also going to establish special economic regions. These will include production, trade, tourism, education, entertainment and residences and these regions will be duty-free.

THE FIRST STEP IS FROM CHINA: These regions will be established by the private sector, with the guidance of the state. We will also offer support to these regions abroad. The entry suppliers will also be under guaranty. The Chinese want to establish a Chinese region in our country. We will also be offering them our support.

FULL SUPPORT TO ENERGY: We support those who make energy investments. For example a firm needs 500 megawatts of energy. The investment support will be granted for this portion.

CURRENT DEFICIT IS 3.8 BILLION: The antidote to the current deficit in the short-term may be simple measures. We are expecting a 3.8 billion dollar deficit for January. It will take three to five years for this incentive package to turn into an investment. When it comes to the current deficit, it is not a daily concern, what matters is taking measures geared towards the future.

Headed on a road show with the economic package
Minister Çağlayan shared the information that they plan to present the initiatives package to Prime Minister Recep Tayyip Erdoğan this week, "Afterwards, we will be heading on a road show with all of the other chambers in the Union of Chamber and Commodity Exchanges. We are going to tell them about our new incentive system. There are also sections of the package that necessitate legal changes."