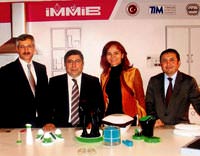 The 111 Turkish firms participating in the world’s largest kitchen and home appliances fair Frankfurt Ambient; have become the lifeline for European businessmen seeking an exit strategy.

Our attending Turkish businessmen came away from the fair with approximately 300 million dollars of business connections and walked away from the tables they held meetings on with a variety of collaboration offers.

Istanbul Mineral and Metals Exporters' Association (İMMİB) President Tahsin Öztiryaki shared that throughout they fair, they were proposed a variety of collaboration offers such as partnering with European factories and co-marketing, and states "There are close to one million firms in Europe that won't make it to the third generation. Firms at the SME level as well as larger companies should show interest in these offers. It's now time to look for brands."

Explaining that Turkey is now well-known in Europe, Öztiryaki states, "We need to catch on to this crisis wind. Turkey is also extremely successful in entering new markets in the crisis and creating new products. We are ahead of European companies that are avoiding stockpiling during the crisis. 2012 is our year. We have to work hard this year without dropping momentum." Öztiryaki also stated that free trade agreements are effective when it comes to opening up to new markets and emphasized that the exporting initiative package expected to be released this week, will also be considerably significant.