February 28th postmodern coup was a strike against Turkey's economy 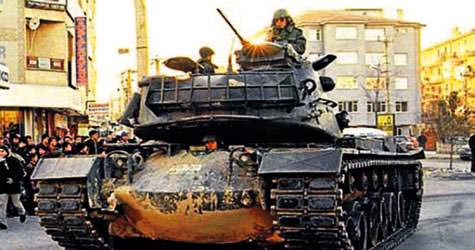 Today is February 28th, the anniversary of what is now referred to as the Postmodern coup. On February 28th, 1997 decisions were made by the Turkish military at a National Security Meeting that would lead to the resignation of Erbakan, the Welfare Party and his coalition government.

The 1997 coup hit the economy just as hard as it hit the nation's political structure at the time. Trade was obstructed, investments halted and businessmen blacklisted. The postmodern coup also resulted in bringing on the 2001 economic crisis. Overall the price of the coup has been calculated at 300 million dollars. The barrier that was built at the time blocking Turkey's goal to become one of the world's top ten economies has taken 15 years to overcome.

It has been 15 years now since that February 28th. At that time however both Turkey's political and economic world were called in for questioning. Businessmen faced slander by way of being labeled as reactionaries, and a number of merchants from kebab restaurants to pastry shops were blacklisted. A full-on psychological operation was being staged at the time. Businessmen from that time express that the postmodern coup resulting in blocking Turkey's economy from advancing. According to these such businessmen, who directly blame the 2001 crisis on the February 28th era, "If there had not been a coup, then Turkey today would have become one of the world's top ten economies." We asked a number of other prominent figures in Turkey's economic world to relay their views on that time period which transpired 15 years ago today.

At that time I was the Secretary General for MÜSİAD. The policy at the time was directed towards eroding and staging a psychological operation on the media. There was so much pressure; police would ask if we had permission from the attorney general to even hold press conferences. The Association Law was like a tight jacket. For us at the time correspondence with foreign chambers of commerce and attending trade fairs was all dependent on receiving approval from the attorney general. We had to receive permission 24 hours prior in order to release and announcement to the press. In the first week of June, an article entitled 'The military has staged an embargo on Islamic capital' was released in Milliyet. The real objective of this headline was yet again a psychological attack. The message was being delivered to public establishments and to banks to 'not conduct business with specific companies and to not offer credit or collateral. A number of businessmen resigned from their MÜSİAD membership and some were forced to take down signs with calligraphy. When we look at the main actors of the February 28th coup now, most of them are desolate. From November 3rd, 2002 up until now, we have been trying to restore the affects of the coup.

I was the chairman of the Konya Chamber of Commerce at the time. Nadi Türkaslan was the attorney general. Businessmen who helped associations were questioned. Capital was tagged as being either red or green. They would call us reactionaries. The head of the Turkish Union of Chambers and Commodity Exchanges (TOBB) Fuat Miras wanted to put an embargo on us. We held a press conference and said, 'The TOBB doesn't represent us'. The TOBB was also a part of the group that organized the postmodern coup. They didn't provide Kombassan's incentives; they blacklisted Petlas as being 'green capital'. Certain companies' investments were obstructed they were put under pressure, their money confiscated and they were not granted permission to increase their capital. If there hadn't been a coup, then today in Konya alone, the 1.5 billion dollars of exports would not have been below three to four billion dollars.

During the February 28th period, capital was tagged by colors. Even small merchants or kabab stores were tagged. Trade was blocked. At that time, a number of establishments were told to not do business with Ülker. Irregularities were established. Attempts were made to veer people away from shopping according to their own free will. They tried to divide the public and merchants into two. Directly following the February 28th coup was the 2001 economic crisis. A number of banks went down and Turkey's economy suffered billions of liras in losses and the country regressed. It is only recently that we have been able to free ourselves from that pressure. If Turkey is not one of the world's top ten economies at present, then I believe the most significant reason why is the interruption experienced in the nation's democracy. The civil society organizations operating during the February 28th era should apologize.

I believe that the February 28th era has caused a 300 billion dollar loss for Turkey's economy. The coup also established the framework which led to the 2001 crisis. Therefore, it is difficult to calculate the economic and social repercussions of the coup. It is as if certain individuals halted Turkey's advancing economy. With briefings on reactionaries, tension was created in the country out of nothing. The way to keep the nation's economy standing is through morale. Capital has no color. Those who tagged us as green capital then, now see that we have no other intentions besides a love for our nation.