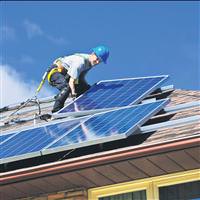 Germany’s energy giants will soon be coming to Turkey to set up a solar power station. In recent months, firms such as Phoneix, Gehrlicher and now the Duisburg-based Soventix, have announced intentions to invest in Turkey.

The fast growth in Turkey's energy market has drawn interest from German firms. In just one month, three mega-energy companies from Germany have joined forces with Turkish firms in order to build a solar power station in Turkey.

Following Germany's solar power giants Phoenix and Gehrlicher decision to come to Turkey, another global firm based in Duisburg has decided to follow suit. On February 8th, Soventix contacted Economic Minister Zafer Çağlayan while in Germany, and members of the company's management explained their plans involving Turkey. Speaking to Minister Çağlayan, Soventix CEO Thorsten Preugschas explained that they are warming to the idea of investing in Turkey due to the nation's high potential. Preugschas explained that they would be bringing their international experience to Turkey and stated that their plans involve initially setting up 500 kWh power stations, which do not require licensing, followed by embarking on larger projects in the future.

SOLAR FIELDS TO BE SET-UP
This month the sector saw a very interesting investment from Germany. Preugschas announced investment plans to provide solar energy for technological giants Bosch, Siemens and SMA in Turkey. Gehrlicher, which operates in 16 countries, has partnered up with Turkish firm Merk Solar and announced plans to build solar fields in both the Southern and Eastern regions.

INVESTMENTS TO BEGIN IN A FEW MONTHS


Thorsten Preugshcas, the CEO of Soventix, which operates in a number of countries spanning from the United States to Australia, states, "We will make our first investment in Turkey within the next few months."

JOINT INVESTMENTS STAND-OUT
Germany's Phoneix is another firm that stands out with plans to join forces with İres Energy and to embark on a 60 MW operation by 2014.