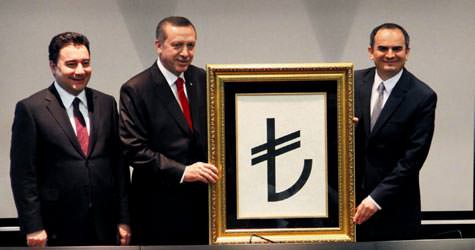 The new symbol is meant to bring together the letters T and L, and to be reminiscent of an anchor. The upward direction of the two cross lines is intended to represent rising market value. Erdoğan describes the significance of the symbol's imagery by stating, "This symbol shows our currency's rising value as a safe haven.

Hopefully, with the efforts put forth by our Central Bank as well as by all of our state institutions, our media, civil society organizations and each and every citizen, this symbol will become recognizable throughout the world. This symbol will be added to computer keyboards. My hope is that after the promotional campaign we will stage for the entire year, this symbol will be imprinted on people's minds. To drop the additional zeros and to give our currency a symbol, is, I underline, absolutely not just a technical operation. It is intended for our currency to gain esteem and value and to represent our nation, our country's reawakening and to stand tall and stand out as a global actor by stating, 'I am here'."

Noting that Turkey's currency now represents esteem, Prime Minister Erdoğan goes on to state, "Today, citizens of the Turkish Republic are proud of the Turkish currency they have in their wallets. Do you remember the time of foreign exchanges offices? Weren't they on every corner? Why? Because, our currency had no value. Those who received wages would take them straight to the foreign exchange offices in order for their money earned to not lose value. Almost all of those foreign exchange offices have since shut down. We don't need them anymore, because our currency now has strength, honor and dignity."

Central Bank Governor Erdem Başçı explains that in determining the symbol for Turkey's currency, there were two specific characteristics of both the TL and Turkey's economy they wanted represented. "These are the rising values of security and stability. The fact that the symbol is reminiscent of an anchor emphasizes that notion that the TL is a safe haven for protecting securities. The upwards direction of the two parallel lines represents the stable upwards growth of the Turkish lira and economy.