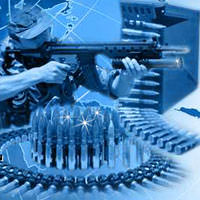 Turkey’s Machinery and Chemical Industry Corporation had a record breaking year in profit with weapons and ammunition sales to 29 different countries including the United States and Germany.

Last year, the Machinery and Chemical Industry Corporation set a historical record in profit for selling weapons and ammunition to a total of 29 different countries spanning from Panama to the Philippines to Switzerland and the United States. With a 180 percent increase in profit compared to figures from the year prior, 2011 sales reaped in 165 million liras in net profit. Assigned to providing all forms of weaponry, ammunition, rockets and explosives, the corporation's 2010 sales figure of 650 million liras soared to 850 million liras last year.

A 350 MILLION LIRA HIT ON THE CURRENT ACCOUNT DEFICIT

Orders from Turkey's Ministry of National Defense, the Armed Forces, the Ministry of the Interior, the Department of Police and the National Intelligence organization alone reached 350 million, 832 thousand liras last year.

In recent years the Machinery and Chemical Industry Corporation has designed a number of new products, not only through establishing a series of university and industry collaborations but also as a result of heeding significant consideration to research and development, resulting in an increase in exports every year. Last year, the Machinery and Chemical Industry Corporation sold a total of 98 million, 478 thousand liras worth of weapons and ammunition to 29 different nations spanning from Panama to the Philippines and from Switzerland to the United States. Including domestic sales, the Machinery and Chemical Industry (MKEK) realized a total 165 million lira in profit last year. In 2011, the Corporation also managed to sign on to 630 million liras worth of exporting agreements in 2011.

SAUDI'S SHOOT FOR THE SS30 RANGE

MKEK is currently operating with 28 of Turkey's most prestigious universities to fulfill a total of 127 R & D projects including the 'National Tank Altay'', the ''Modern National Infantry Rifle", the ''Sharpshooting Rifle'', ''Air Portable Howeitzer'' and the ''Penetrable Bomb". The total budget for the aforementioned projects is 283 million liras.

The total sales made abroad by the Machinery and Chemical Industry Corporation on a Turkish Lira basis is as follows: