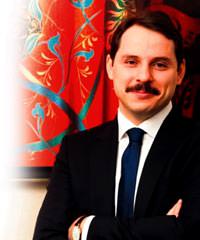 Çalık Holding has redeemed their five-year 200 million dollar bond, in what CEO Albayrak states, "was the most successful issue in terms of demand and interest.”

Çalık Holding redeemed their 200 million dollar maturing five-year term bond yesterday. First issued in 2007, the 2.5 month program they embarked on for the bond was realized with excellent planning and management. For a whole week during the Road Show, nearly 100 foreign investors were met with. International investment establishments from all over the world, especially London, showed intense interest in the bond issue. With the number of investment demands reaching five times over the figure expected, the 150 million dollar issue was increased to 200 million dollars and the term brought from three years up to five.

Çalık Holding CEO Dr. Berat Albayrak states, "We have redeemed the 200 million dollar maturing bond, which was one of the first corporate bonds in our nation. Not only with its demand, but also with the interest created, it has qualified to be one of the most successful issues made by a Turkish company. I want to thank all of our investors for the interest and trust they have shown us."

Emphasizing that this positive maturity and interest shows that should they want to take out another bond they will now be able to obtain funds under much more suitable circumstances, Çalık Holding CEO Dr. Berat Albayrak goes on to state, "Within the framework of cyclical developments, our group intends to continue their presence in the bond market and will evaluate new issue opportunities in the upcoming period."