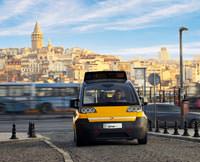 Karsan’s new V1, which was a show of force at the Geneva Auto Show, vastly considered the showroom for the automotive industry, has received full support from the government. With plans for a 200 million euro investment, in 2014 the automobile will go into mass production.

Turkey's automotive sector has made its mark on this year's Geneva Motor Show. During the fair, Karsan revealed their finished version of the V1 automotive, a concept first conceived for the New York taxi tender. The vehicle, which was designed 100 percent by Turkish engineers, marks the first time a completely Turkish automotive brand has been displayed at an international fair. Both a taxi cab version and a passenger vehicle version of the automotive were on display at the fair.
Ankara, which has been in pursuit of a 'domestic' car, also offered their support to Karsan in Geneva. Minister of Economy Zafer Çağlayan and his accompanying committee paid a visit to the Karsan stand, during which Çağlayan expressed that Turkish engineers are now delivering a message to the world. "Our Prime Minister was seeking a 'hero' to come out and add added value to the automotive sector and to decrease the current account deficit. That 'hero' is here," states Çağlayan, who goes on to say:


"We wanted to come here to show that the government places high importance on the automotive sector and that we are standing by them. Now is the time for Turkey to embark upon mass production. This is the first time Turkey is putting an automobile they have designed in its entirety on display. It's a good thing the New York taxi tender transpired. I want to congratulate İnan Kıraç, Jan and Claude Nahum for showing their presence in the world's biggest auto show."

While at the Geneva Fair, Karsan Chairman of the Executive Board İnan Kıraç stated the following: "I am somewhere today I never imagined I would ever be. I have been in this sector for 60 years and I am now watching in amazement as my dreams are being realized. We are in the lead in this sector."

Explaining that both vehicles were developed for 17 million dollars, Karsan Executive Director Jan Nahum states that the vehicle will be produced with a 200 million euro investment in the first half of 2014 and will have a production capacity of at least 20,000 annually. Nahum also noted that the engine will become a completely domestic manufacture between the years of 2015 and 2017.