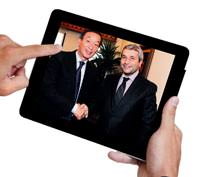 Fujitsu, the manufacturers of waterproof tablets, has offered a proposal to Turkey’s national education Fatih Project. Vice-Chairman Satoru Hayashi explains that Fujitsu would like to invest in Turkey’s education, communication and network technology sectors.

Fujitsu Vice-Chairman Satoru Hayashi revealed signs of the firm's intentions to invest in Turkey during a meeting with Science, Industry and Technology Minister Nihat Ergün. Stating that as Fujitsu, they want to increase their current 35% EU market share to higher levels, Hayashi also announced that they have presented a proposal to Turkish officials for the Fatih Project. Hayashi explained that Fujitsu's tablets differ from others because of their waterproof characteristic, which they have tested out in front of German Chancellor Angela Merkel.

During the meeting, Fujitsu Vice-Chairman Satoru Hayashi stated, "As Fujitsu we are not only involved in production technology, but we also have activities in areas such as education, communication and network technologies. We want to bring our work in these areas to Turkey."
Minister Ergün in exchange stated that with the nation's young and dynamic population, Turkey is an

deal location for information and communication technology firms and stated, "Take advantage of this potential. On either a ministry or government basis, we are ready to support any form of investment Fujitsu embarks on in Turkey.

The tender specifications for the Fatih Project are currently in development. The specifications will include the gradual increase of the domestic rate of involvement. Meanwhile a number of Middle Eastern nations will also be observing the project's development. Therefore, the successful model and application of this project will be well-received in these nations and possibly even implemented in the future."

Stating that the Fatih Project will be an ongoing one, Minister Ergün says, "This project may be developed on a horizontal basis in other sectors. With the Fatih project, a new generation may evolve geared towards educating students through utilizing information and communication technologies."