A Turkish oasis in Tunisia’s desert 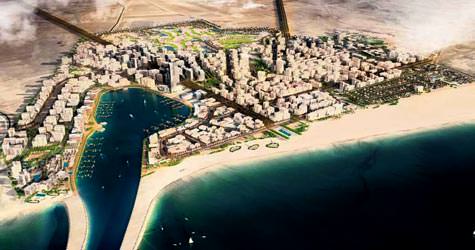 
Turks are signing on to a project set to transform Tunisia into becoming the Dubai of the African continent. Drafted in 2007, the project was put on hold due to the economic crisis which was followed by Arab Spring. Since then, GFH, which intended to take on the project in its entirety, has invited Turkey's Demtaş to join them. Certain elements of the project have been regenerated and now Demtaş has signed on to a 50% agreement for the project with GFH. As a result of this collaboration, Tunis Financial Harbour, which was first conceived by Tunisia's overthrown leader Zine El Abidine Ben Ali, will become the Mediterranean's largest fabricated city and the African continent's first-ever financial center.

The project's architect Gulf Financial House is an establishment Turkey is well familiar with. Having entered the highest bid and therefore winning the Adabank tender, new owners Gulf Financial House's Chairman of the Executive Board Esam Janahi states that they will soon be starting construction and infrastructure work with their Turkish partners Demtaş.

Last week, the five-billion dollar project, which will also consist of a significant residential area, including educational and medical resources, was presented to Tunisian Prime Minister Hamadi Jebali. Demtaş Executive Board Member Dinçel Tekin explained their plans to erect a city out of nothing on 520 hectares of land, on which he says they are also aiming to provide housing opportunities for 103 thousand people.

The Tunis Financial Harbour, which will consist of a total one million, 400 thousand square-meter commercial area, will also include a yacht marina with a capacity to host 814 boats. Also, in addition to the business centers and residences that will be built in the financial 'oasis', a 252,000 square-meter area has been allotted for education and the building of schools and universities. The new center will be accessible by other regions of the country by metro.

According to Dinçel Tekin, "This project will represent the transformation which has resulted from the Arab Spring. With 18-hole golf courses and hotels, this area will also become one of the most important tourism regions in the nation."